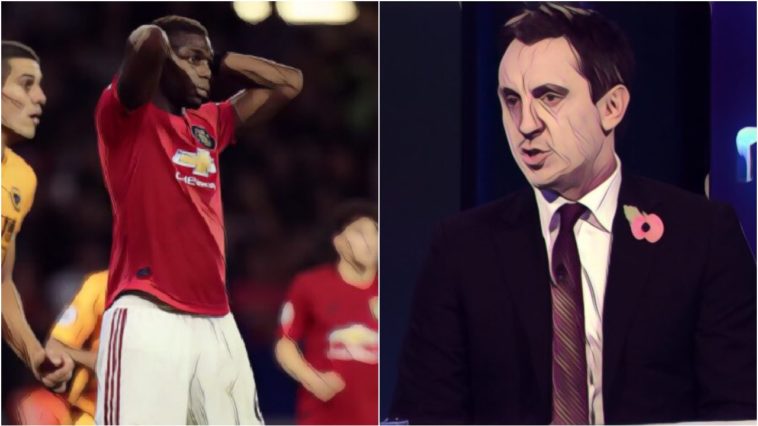 Gary Neville was left angered at Manchester United’s penalty confusion in their 1-1 draw at Wolves, and questioned the club’s ’embarrassing’ lack of leadership.

United were held to a 1-1 draw at Molyneux at Monday night, with midfielder Paul Pogba missing a second half penalty for Ole Gunnar Solskjaer’s side.

Many were surprised to see the French midfielder resume last season’s penalty duties, after Marcus Rashford had scored from the spot against Chelsea last weekend.

Pogba has now missed four penalties in the Premier League since the start of last season, more than any other player, and former Manchester United defender Neville was left angered at the confusion over who should take the spot-kick.

“Why is there a debate on who takes the penalty? I don’t like it,” Neville said on Sky Sports.

“There should never be a debate. Pogba has missed four in the last 12 months. You’d think he has had his chance. Rashford scored last week — take the penalty. But there wasn’t a leader out there. Something wasn’t right. They couldn’t make a decision between them.

“Initially, I was fuming with Pogba. But when I looked at what happened with last week’s penalty with Chelsea, it was weird.”

Red Devils boss Ole Gunnar Solskjaer has defended the decision to allow Pogba to take the penalty, saying the 26-year-old and Rashford are both designated takers this season.

Speaking to Sky Sports, Solskjaer explained the decision lay with the players, and who feels confident in taking the responsibility.

“The two of them [Pogba and Marcus Rashford] are designated penalty takers, it’s up to them there and then — ‘this is mine’.

“Sometimes players just feel they are confident to score. Paul has scored so many for us and today it was a good save. You can see the slides on the Powerpoint [to prove they were both designated penalty takers].

“The two of them have been confident before. Marcus scored last week but Paul was also confident. I like players with confidence.”

Neville was quick to dismiss Solskjaer’s policy, saying the decision causes confusion and believes the United boss needs to be ‘stronger’ and make a decision on his first-choice taker.

“It isn’t right. We don’t come on air tonight and ask each other which pieces of analysis we’re doing – we decide before we come on. They should decide in the dressing room. It’s embarrassing.

“This is a Manchester United penalty — this isn’t a tombola. This is not under-fives football on the playground.

“That will never work. You will get that on-pitch conversation every time United get a penalty. You don’t need that conversation. The manager needs to be stronger. Or Paul Pogba should think of the team and say Rashford is the best penalty taker. It’s cost them two points tonight.”