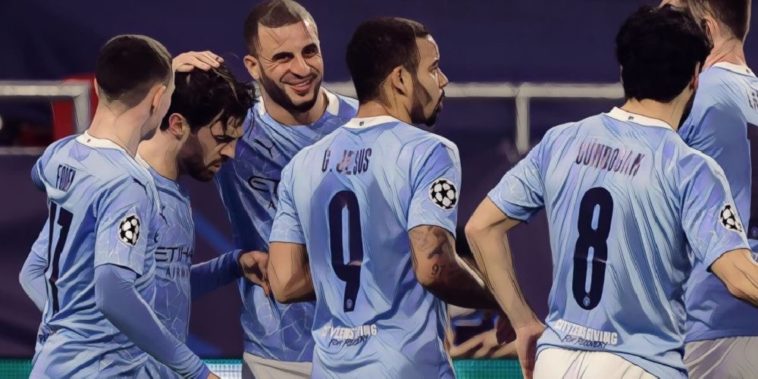 Manchester City put themselves in a commanding position in their Champions League last 16 tie, beating Borussia Monchengladbach 2-0 in Budapest.

Man City quickly settled into their trademark dominant style, with Monchengladbach being forced into some astute defending from the off.

City would, however, break the deadlock in the 29th minute, in-form full-back Joao Cancelo putting a wonderfully floated cross in towards the back post where Bernardo Silva was waiting to head past Yann Sommer.

For all of City’s domination, Sommer wasn’t exactly overworked though, Pep Guardiola being left frustrated in the second half as Gabriel Jesus dithered in getting a shot off, allowing defender Nico Elvedi to get a challenge in and deny the Brazilian.

Jesus did eventually find the back of the net in the 65th minute though, the Citizens’ second coming through an almost identical route to the first. Cancelo put in another cross into the back post to goalscorer Silva, the Portuguese putting the ball back into the six-yard box where it was tucked home by the Man City number nine.

Monchengladbach didn’t get forward too often, but when they did, they often found their final ball to be lacking, with City ‘keeper Ederson making his only save of the game in injury time, the Brazilian ‘keeping out Hannes Wolf’s effort from the edge of the box.

It seems like every year Man City are hyped up as potential #UCL winners, before getting dumped out in the quarters. 🤦‍♂️

City have now won 19 consecutive matches in all competitions, leaving Pep Guardiola’s side the bookmaker’s favourite to lift their first-ever European Cup in the showpiece in Istanbul in May.

Speaking afterwards though, the Catalan suggested his former side – reigning champions Bayern Munich – are the front-runners to win the competition once again, saying his side need to be more clinical in front of goal.

“In general, we controlled the game. Unfortunately today we were not clinical enough up front,” he told BT Sport.

“When I see Bayern Munich I don’t think we are favourites. My target is West Ham in three days.

Next up for City is a return to Premier League action where they face an in-form West Ham at the Etihad.