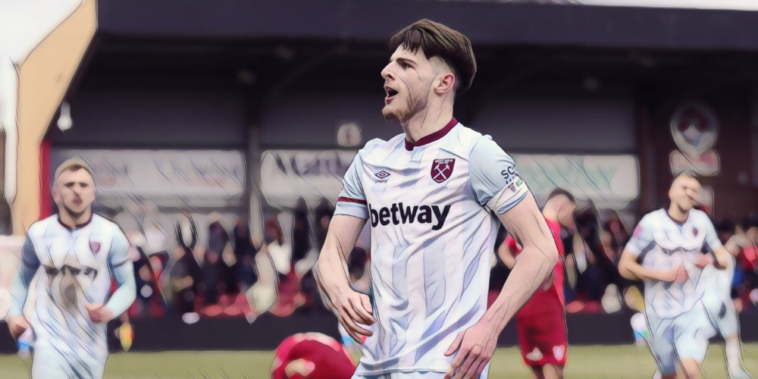 David Moyes believes Declan Rice can be a ‘future captain’ for England and insists the West Ham midfielder is ‘getting better’.

Rice came off the bench to rescue West Ham at the weekend, scoring a stoppage-time equaliser as the Hammers avoided a huge upset in their FA Cup fourth round clash with non-league Kidderminster Harriers.

The 23-year-old has enjoyed an excellent individual season to lead the Hammers’ push for a top-four finish and Moyes believes the midfielder is improving with each performance.

Speaking ahead of West Ham’s clash with Watford in the Premier League tomorrow evening, Moyes outlined his belief that Rice has the hallmarks of a future England captain.

“As an individual he’s a really improving young man who’s gaining a lot of experience and getting better,” Moyes said at his pre-match press conference.

“He learns an awful lot from Mark Noble. He’s involved with lots of senior players with England and should take a look at them because he’s got the potential to be a future captain. He’s an impressive young man.”

Rice has been linked with an exit from the London Stadium with a host of the Premier League’s leading sides reportedly interested in his services, though Moyes reiterated the midfielder’s importance to his side.

“He’s a really important player for West Ham, someone we value greatly, and you can see what he means to the team. He’s a really good individual and we’re enjoying having him.”

Moyes also discussed Roy Hodgson’s appointment as the veteran coach prepares for his first game in charge of Watford and the Scot has backed the 74-year-old to give the Hornets a ‘great chance’ of securing Premier League survival.

“If there’s anybody who can help Watford stay up, Roy Hodgson would be the name I’d pick. He’s a really good coach and someone who’s managed at all different levels. He will give Watford a great chance of avoiding relegation.”