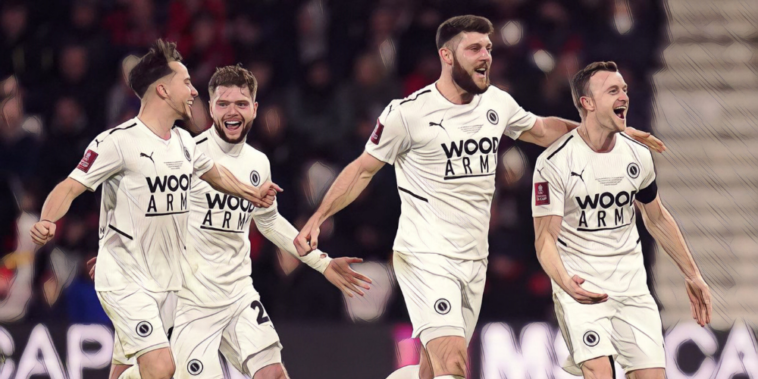 Our FA Cup awards honour the best – and worst – of the football action from the weekend.

There’s nothing quite like a cup upset and Boreham Wood’s progress to the fifth round earns our Moment of the Week accolade.

The National League side have not conceded a single goal on their passage to the fifth round and they were again well-organised and well-drilled to secure a shock win at Bournemouth.

Bournemouth are pushing for promotion to the Premier League and strengthened their squad with some eye-catching arrivals last month, but the Cherries were beaten 1-0 at home after veteran midfielder Mark Ricketts scored the game’s only goal.

The 37-year-old had been in the Charlton Athletic academy at the same time as Bournemouth boss Scott Parker before forging a career in non-league, with this – just his third goal in more than 200 appearances for Boreham Wood – surely the finest moment of his career.

Luke Garrad’s side rode their luck on occasion and had just 18% of the ball, but even given their conceding of the ball the visitors reduced Bournemouth’s ability to create clear-cut chances.

Their reward is a fifth round trip to face Frank Lampard and Everton at Goodison Park, a dream draw for the last non-league side remaining in the FA Cup this season.

An honourable mention goes to Harvey Elliott’s goalscoring return for Liverpool, the talented teenager making his comeback from a horror injury with his first goal for the Reds.

Forest have now eliminated the previous two FA Cup winners in consecutive rounds, with their performance against Leicester headlined by another brilliant display from Brennan Johnson.

Johnson has been exceptional this season for the Championship side, scoring eight goals and providing five assists in all competitions with his eighth goal of the campaign coming in the 4-1 win over the Foxes.

The 20-year-old’s pace and movement caused problems all afternoon for Leicester, who struggled to cope with Johnson and right-back Djed Spence as the duo combined down the right.

Forest rejected big money for Johnson – including an £18m offer from Brentford – during the January transfer window and will be hoping that the winger can propel them towards the play-offs and promotion this season.

Southampton are into the fifth round and will meet West Ham for a place in the quarter-finals, the Saints coming from behind to beat Coventry in extra time.

Stuart Armstrong’s leveller for Ralph Hasenhuttl’s side was a thing of beauty, a rocket of an effort which flew into the top corner from distance.

This Stuart Armstrong goal just gets better with every replay.@SouthamptonFC #EmiratesFACup pic.twitter.com/UdLvxrw62o

Manchester United’s hopes of ending their barren run without silverware were dealt a blow on Friday, after the Red Devils were eliminated from the FA Cup on home soil.

Middlesbrough got the ball rolling with the first upset of the weekend’s action, progressing to round five after a penalty shootout win at Old Trafford.

United missed a host of chances to secure the win, including Cristiano Ronaldo who missed the target completely from the penalty spot in normal time.

The worst miss of all came from Bruno Fernandes, however, who somehow managed to only his the post with the goal at his mercy.

Trent Alexander-Arnold continued his fine season for Liverpool this weekend, adding another assist to his growing collection after his free-kick was headed home by Diogo Jota against Cardiff.

The right-back leads the Premier League rankings for assists in all competitions, having registered his 15th of the season in Liverpool’s 3-1 win over the Championship side.

15 – Trent Alexander-Arnold has recorded his 15th assist of the season across all competitions; this is the most by any Premier League player in 2021-22, as well as the joint-most for Alexander-Arnold in a single season of his career (also 15 in 18-19 and 19-20). Pinpoint. pic.twitter.com/2Ko3DWVIWV

It is remarkably the third time that the 23-year-old has reached 15 assists in a season, with plenty of time remaining for the England international to set a new personal landmark this term.

West Ham turned to a strong substitutes’ bench to save their blushes at Kidderminster this weekend, as Declan Rice’s stoppage-time goal forced extra time and led to an eventual win against the non-league outfit.

Kidderminster had upset their top-flight opponents for much of the contest, with centre-back Issa Diop enduring a truly torrid time at Aggborough Stadium.

The 25-year-old was hauled off at half-time after a disastrous display, the latest in a string of poor performances from the defender who looks low on confidence.

West Ham were linked with the signing of a centre-back in January but failed to secure new additions, a failure that could prove costly to their Champions League hopes if their current options are unable to turn their form around.