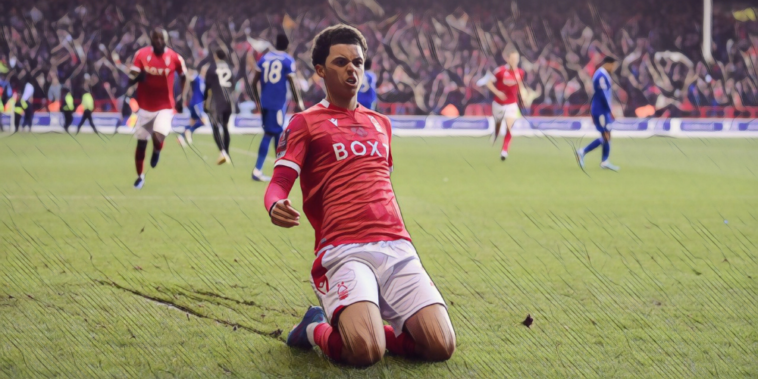 The FA Cup’s magic was prominent once again during the competition’s fourth round, with the weekend’s fixtures including some classic contests and huge upsets.

Middlesbrough dumped out Manchester United on penalties after battling through to a shootout at Old Trafford, whilst Boreham Wood’s shock win at Bournemouth ensured there will be non-league representation in the fifth round.

Elsewhere Chelsea and West Ham survived huge scares against lower league sides to progress, and there were wins for the likes of Liverpool, Everton, Manchester City and Tottenham.

Following the weekend’s action, we’ve compiled our FA Cup Team of the Week for the fourth round.

Chelsea are through to the fifth round, but were made to work for their place in the draw after being taken to extra-time by Plymouth Argyle at Stamford Bridge.

The west Londoners came from behind to win in the capital, but were grateful for the performance of Kepa Arrizabalaga who made two fine saves from Ryan Hardie to prevent a cup upset.

Kepa once again showed why he seems like the perfect guy to get poker tips from, his second save coming from the penalty spot as the Spain international enhanced his reputation from spot-kick situations, guessing correctly to save – and hold – Hardie’s tame penalty and ensure Chelsea’s progression.

Having starred during the third round win over Arsenal, the Nottingham Forest full-back was even better as the Championship side thrashed the holders in an East Midlands derby.

Leicester were beaten in convincing fashion at the City Ground, with Spence scoring his side’s fourth in a 4-1 win for Steve Cooper’s side.

The right-back was a threat throughout and linked up well with Brennan Johnson down the right, the dovetailing duo sure to have added more suitors to an ever-growing list after another superb showing against top-flight opponents.

The centre-back overcame a difficult opening period to help Middlesbrough to an upset of Manchester United, producing a strong defensive performance as the Championship side won on penalties at Old Trafford.

The 24-year-old also converted his penalty in fine fashion during sudden death, as ‘Boro’s flawless record from the spot earned Chris Wilder’s side a fifth round tie with Tottenham.

Kidderminster came agonisingly close to an upset of Premier League opposition, with the lowest-ranked team in the fourth round just seconds away from eliminating West Ham.

Two late, late goals – one in stoppage time to force extra time and another in the final moments of the added period – eventually saw West Ham through, but it was an inspired performance from the National League North team at Aggborough Stadium.

Matt Preston has enjoyed four clean sheets as a Harrier – and it took Declan Rice and a piece of magic to stop it being five.

Matt Preston led the Kidderminster defence superbly throughout, winning six aerial duels and making three tackles in a fine performance from the centre-back.

Alongside Spence on the opposite flank, Lowe was influential at both ends as Nottingham Forest tore Leicester apart at the City Ground.

The 24-year-old stuck to his defensive task and pushed forward as the Championship side penned the Foxes in, in what was an impressive performance from Forest to secure their second successive Premier League scalp.

The final tie of the weekend brought the upset the neutrals had craved, as non-league Boreham Wood dumped out Championship promotion hopefuls Bournemouth.

74 places separated the two teams in England’s footballing pyramid at kick-off, but it’s the National League side who will meet Everton in the fifth round after a 1-0 win.

Mark Ricketts scored the game’s only goal to cap an influential performance in midfield, the 37-year-old – who was in the Charlton academy at the same time as Bournemouth boss Scott Parker – scoring just his third goal in over 200 appearances for Boreham Wood to seal a famous FA Cup win.

West Ham’s saviour, Rice came off the bench to turnaround the club’s tie at Kidderminster with his stoppage-time equaliser forcing extra-time.

Rice was a class above following his half-time introduction, with the midfielder’s drive improving a Hammers side who had found themselves on course for a huge upset.

The England international’s goal was a piece of individual brilliance as he surged into the box before firing home, and Rice appears to be getting better and better as the all-action leader of David Moyes’ side.

Let’s not talk about that celebration though, ey?

Came for the goal 🤝 Stayed for the celebration 🕺@_DeclanRice #EmiratesFACup pic.twitter.com/Tt1CuQrrX9

Middlesbrough grew into the game to upset Manchester United on Friday evening, with Matt Crooks at the centre of their spirited performance at Old Trafford.

The midfielder worked hard in the centre of the pitch and was rewarded with the equaliser, turning in from close range in controversial circumstances after the ball had hit Duncan Watmore’s hand in the build-up.

WOULD YOU BELIEVE IT 😱@mdrcrooks scores against the club he supports for @Boro! 💥#EmiratesFACup pic.twitter.com/dgtNknW8c3

Crooks will care little, however, his seventh goal of the season a memorable one to seal a huge win for Middlesbrough.

Manchester City recovered from Fulham’s early opener to progress to the fifth round, securing a 4-1 win over the Championship leaders at the Etihad.

Riyad Mahrez marked his return to the side with an influential performance, first teeing up Ilkay Gundogan’s equaliser before scoring twice in the second half.

Riyad Mahrez shining on his return to City 💫 pic.twitter.com/9AJIbtvkCK

The Algerian now has 15 goals from just 17 starts in all competitions for Pep Guardiola’s side and his return from international duty is a huge boost to the club’s wealth of attacking options.

Nottingham Forest managed to keep Brennan Johnson out of the clutches of Premier League sides in January, though it is surely a matter of time before the winger makes the step up.

Johnson was outstanding as he tormented Leicester in the FA Cup’s fourth round this weekend, adding another goal to his increasing collection and proving a menace to the Foxes’ backline.

The 20-year-old looks set to be a Premier League player next season and Forest will hope that it is in their colours, with Johnson set to be a major influence on the club’s push for the play-offs.

Harry Kane’s renaissance continued with two goals in Tottenham’s 3-1 win over Brighton, the first a brilliant bending finish from distance and one we have seen on several occasions from the England captain.

Kane’s second came from close range to ensure Spurs’ passage to the fifth round, with the North Londoners hopeful of ending their 14-year wait for a major trophy in this season’s competition.

So good to be back out there! A good cup tie and perfect way to start a busy run of games. 💪 pic.twitter.com/1HtfvaKRCr

Kane will be crucial to their chances of a successful season, having taken his record to seven goals in his past 10 appearances in all competitions.