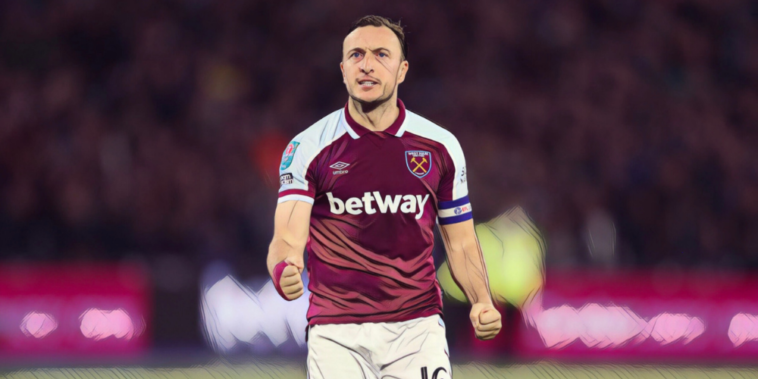 David Moyes has hailed the ‘huge’ role Mark Noble has had at West Ham ahead of an ’emotional’ farewell for the club captain this weekend.

West Ham’s clash with Manchester City this weekend will be the final home game of Noble’s one-club career with the Hammers, after the 35-year-old announced he will be retiring at the end of the season.

Noble came through the ranks at West Ham and has made 548 appearances across all competitions for the East Londoners, spending 18 years in the first-team.

Moyes has lavished praise on the club favourite ahead of an ’emotional’ farewell for Noble this weekend, revealing the role the midfielder played during the pandemic and following his own appointment as manager.

“I’m sure it’ll be hugely emotional for Mark and his family,” Moyes said at his pre-match press conference.

“Your career’s never that long as a footballer but to do it at one club is a huge achievement. It’s not done by many people, so great credit to Mark and the way he’s conducted himself throughout his career.

“Overall, I’m sure it will be emotional, but in the end he’ll think he’s had a really good career when he looks back on it.

“He’s been huge. He’s played a big part in all the things going on during the pandemic and helped me an awful lot when I came in. He gave me an idea of what was required and he’s a really good sounding board. You need people behind you now you can speak with.

“He’ll be certainly missed in the dressing room next year.”

Asked about his side’s preparations and the team news for the game against City, Moyes added: “We’ve probably for the first time had a full week to prepare and we’re looking forward to it. It’s a tough game against a good team, but hopefully, we’ll be ready to go come Sunday.

“Said [Benrahma] is a bit of a question mark. He’s out doing some light jogging so it’s maybe not as bad as we thought, but I’m not quite sure if he’s fit. We’ll see tomorrow. It’s an ankle injury.

“[Michail] Antonio and [Craig] Dawson have trained today. I think they’ll be OK.”