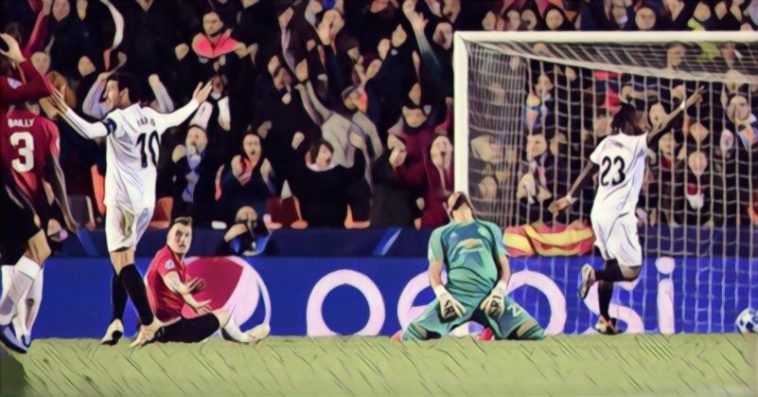 Jose Mourinho has bemoaned the lack of ‘intensity and ambition’ shown by his Manchester United side in their 2-1 defeat to Valencia this evening.

Manchester United went into the game knowing that they had to win their game in the Mestalla to have any chance of progressing to the last 16 as group winners, with Juventus facing the seemingly easy task of beating Young Boys.

Juventus would however slide to a shock 2-1 defeat in Switzerland, meaning that a United victory would see them top the group and face a supposedly easier fixture in the next round.

As for United though, they were unable to get the job done, with a Carlos Soler strike and a Phil Jones own goal condemning them to a 2-1 defeat, with Marcus Rashford scoring a late consolation, leaving Jose Mourinho to bemoan his sides ‘intensity and ambition’ in the first half.

“I think we were too passive in the first half. We were quite comfortable with the ball but not in intensity and ambition,” Mourinho told BT Sport.

“In the second half I was pretty sure that after speaking at half-time things could be different but we started with an own goal that gave Valencia a better position to control the game.

“I made the two changes later and the team improved immediately, we started playing faster, arriving with link play in more dangerous positions, and we probably should get to 2-2 because we had a couple of good chances to equalise. But we started the first half playing too comfortable and not with enough intensity.”

United face league leaders Liverpool on Sunday, but Mourinho dismissed the suggestion that he was focussed on the weekend game rather than this evening’s encounter in Eastern Spain:

“Tonight it is job done in a difficult group, I don’t think we were brilliant in this group phase, but with the problems we had and the injuries we had we managed to come here already qualified.”