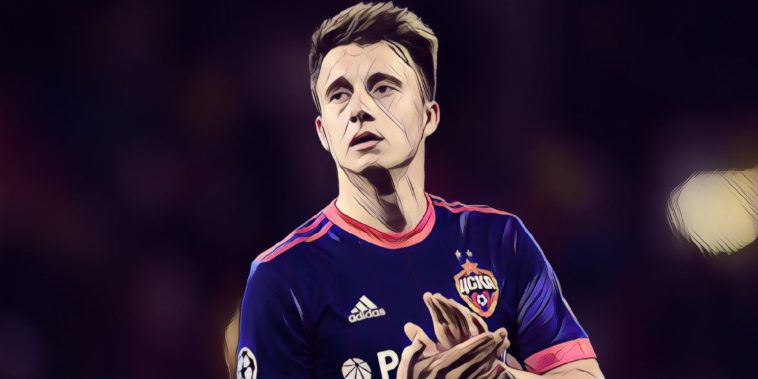 Jose Mourinho has prompted speculation of a summer move for Russia star Aleksandr Golovin after praising the Russian international following his dazzling display in the World Cup opener on Thursday.

The CSKA Moscow midfielder scored one, provided two assists and created five chances as Russia ran riot in the opening game of the World Cup, as the hosts thrashed minnows Saudi Arabia 5-0 on home soil.

Manchester United manager Jose Mourinho was in Moscow to watch the game as part of his punditry role with Russian broadcaster RT.

Mourinho was spotted watching Russia’s final pre-World Cup friendly against Austria last month, with reports suggesting the Portuguese was scouting Aleksandr Golovin and not Marko Arnautovic, as was initially speculated.

Speaking after the game, Mourinho was full of praise for the 22-year-old, who has also attracted the attention of Arsenal:

“The manager changed the team in relation to the match I watched in Austria. He played with a back four, which is normal against a team like Saudi,” Mourinho told RT.

“I think Alan Dzagoev was playing quite well but when he came out, the fact that Golovin could go to a more central position, I think it helped the team.

“The team became better. Golovin is a playmaker, he’s a player that gives the dynamic of the team.

“Denis Cheryshev is a fast boy on the wing, more of a winger than Golovin, stretch the game more than Golovin, so I think the change worked perfectly.”

Italian Champions Juventus have also been linked with a move for Golovin.