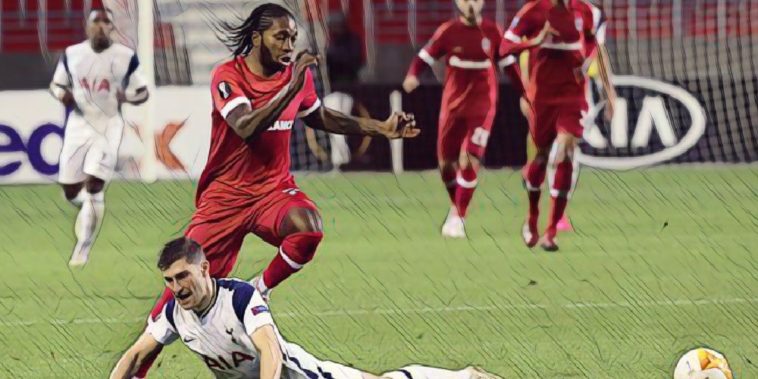 Jose Mourinho accepted the blame after witnessing his Tottenham Hotspur side succumb to a shock 1-0 defeat to Antwerp in the Europa League on Thursday night.

The former Manchester United boss made nine changes from the side that edged past Burnley on Monday – including handing a second start for Gareth Bale on his return to the club –  yet those who came in did little to stake their claim for further involvement.

The Premier League side laboured in the opening period and were soon punished, defender Ben Davies’ slip allowing the Belgian side in on goal, Lior Refaelov smashing home to stun the visitors.

Mourinho had clearly seen enough and acted swiftly at half-time, withdrawing Giovani Lo Celso, Steven Bergwijn, Carlos Vinicius and Dele Alli, the latter, in particular, failing to impress on what was a rare start for the England international.

The away side improved little after the break and even with the added addition of Harry Kane for a below-par Bale, Spurs could simply not gain a foothold in the match. Despite the dreadful showing  Mourinho shouldered the blame, although he did admit that he had learned a lot about some of his players after their shoddy performance.

Spurs failed to produce a single shot on target in the entire second half against Antwerp.

Their final shot on target was in the 19th minute…before Antwerp took the lead. 😳 pic.twitter.com/4EMJRYgEAt

“But I have to do both at the same time. Praise them because they were playing at the maximum of their level and we have to blame ourselves because we were poor.

“The performance was poor and the result is poor. Somebody to blame? Blame me because I am the boss and it is my responsibility who plays and I am the one to blame.

“But I have to admit that the game confirmed to me a few things, opened other question marks and will help me in the future with my decisions. I’m also learning every day.”

With a Premier League clash with Brighton to come at the weekend, Spurs will have to move on quickly, in what will be a much more “difficult” fixture than Thursday night, according to Mourinho.

“Brighton is much better than Antwerp. There is no comparison,” he added.

“I hope my players feel hurt by this defeat and that they analyse themselves and get the points against Brighton which is a much more difficult match than this one.”