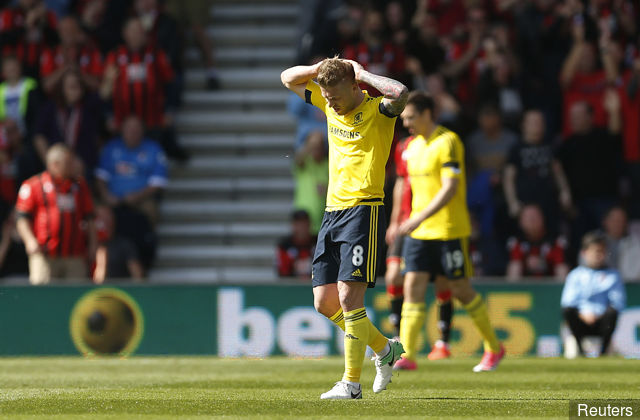 Ask a Middlesbrough fan how they’re feeling and you’ll get an answer along the lines of – “What kind of daft question is that”.

“Low” would be the real answer. Boro fans surely haven’t felt this low for a long time. There have been some real lows over the years, such as sleepwalking to relegation under Gareth Southgate in the 08/09 season. The unbelievable upset they all went through in the 96/97 season were of the likes never felt before, though somehow this season has surpassed anything I’ve ever felt before as a Boro fan.

Obviously there have been lower points in the clubs history, 1986 and near liquidation being the lowest you’d feel.

Yet for those of us not born then, or at least not old enough to fully appreciate the enormity of that situation, this season has to represent one of the darkest moments for me.

Fair enough, they’re not near to extinction or in the lower reaches of the Football League, but given the length of time it’s taken to get back into the top flight, the years of purgatory, this season has been nothing but one almighty anti-climax.

We’ve see teams relegated in the past after just the one season in the top flight. Both Blackpool and Barnsley left a lasting impression in their one season, some maverick displays and big results doing enough to have them as many people’s second team.

However, Middlesbrough have been here before. They are not just one off Premier League gate-crashers. As well as being one of the inaugural members of the newly formed Premiership back in 1992, they’ve spent a total of 14 seasons out of the 25(including this one) in the Premier League since its inception. They’re old hat.

The references to Blackpool and Barnsley were to emphasise that whilst they may not have been good enough to survive, they certainly gave it their all in the one season they had. The sad reality of Boro’s situation is that they’ve done nothing to leave a lasting impression, well other than the fact they’ve acquired the mantle of one the most boring teams in recent memory. They’re going down without as much as a whimper.

Blackpool’s spell in the Premier League was short but memorable

Ok, nobody will ever do as badly as that car crash of a Derby County team in the 07/08 season. One win and only 11 points to show for a horrific campaign means the title of the worst Premier League side of all time is safe with them.

But any supporter across the country, when asked who the worst team this season has been, they’ll all come to the same answer: Middlesbrough.

Where’s the excitement been?

Even Sunderland, rock bottom and three points behind their North East rivals, have fared better in terms of wins and goals scored. Ok, so they’ve lost 4 more games, yet they’ve been involved and they have shown more threat going forward – they have Jermain Defoe.

They blew Crystal Palace away at Selhurst Park, 4-0 up by half time, a freak result of course looking at the contrasting fortunes of the two clubs, but still there was a brief moment of excitement. We all know what happened to Boro there…

Excitement has been something of a rarity on Teesside. Wednesday’s Wearside opponents felt the wrath of Boro back in August in a game which represents their only win on the road this season. After that, other than wins against extremely poor opposition in Swansea and Hull, and a decent victory at home to Bournemouth, it’s generally been average at best. Horrible at worst.

Poor opposition they might have been back then, but Swansea and Hull did something that Middlesbrough didn’t. They switched managers at the right time and strengthened the squad. The outlook couldn’t be more different.

Now it is Boro in grave danger (or in the grave itself waiting to be buried), whereas The Swans and The Tigers are now looking up, or at least in a more positive situation. Still not out of the woods mind, it’s a toss-up between the two as to who is joining the wooden spoon rivals in the bottom three.

Failure to ‘have a go’

At least they’ve more than a fighting chance of getting out of it though, which, sadly Middlesbrough don’t. That slim chance evaporated entirely after the humiliating defeat at the weekend on the South Coast. Bournemouth embarrassed Steve Agnew’s men in all departments, then again they embarrassed themselves. The Cherries just compounded the misery.

Steve Gibson’s ‘have a go’ quotes after promotion last season are coming back to haunt him. For as long as I can remember, other than the odd dissenting voice, criticism of the chairman, the hero in many fans’ eyes, has been pretty much unheard of. There’s been no real evidence of ‘having a go’ whatsoever though, well not any sustained efforts put it that way.

Other than those brief moments of joy I touched on earlier, it couldn’t have been further from what Gibson had promised on the field.

Aitor Karanka’s much maligned style did little to whet the appetite. Functional, effective to a point, yet there was no end product. Yes they may have one of the best defences in the league, but what good is that when they can’t knock the ball in at the other end?

It was sad to see Karanka go, I was his biggest fan after everything he had done for us, but as each week passed it seemed the writing was on the wall.

Personally I would’ve liked him to see the season out, it was what he deserved in my opinion, yet it seems even he felt he’d done as much as he could and left of his own accord, or that’s what we were told anyway. The timing of his departure though has just added to the calamitous nature of this season.

With no option for a new manager to bring any fresh legs in, they would have to make do with the squad that’d failed miserably up to that point.

That included the underwhelming additions in the January Transfer Window. A Window that saw Jordan Rhodes leave too – his name often used as a stick to beat Karanka with, it was almost a relief when he left, at least that argument had gone.

Eleven games remaining also didn’t represent the greatest of opportunities to turn things around. They may have only been three points behind 4th bottom Palace, but it wasn’t an ideal situation for any new manager to walk into, especially with the run of games there was to come.

To add insult to injury for many fans, Steve Gibson turned to Steve Agnew, Karanka’s assistant. Not the inspiring and experienced head most supporters felt was necessary, but a No.2 who was part of the failing set up under the previous Head Coach.

It has proved to be a poor decision. Agnew has done little to raise spirits among fans; his return of a paltry two points from his first six games mirrored that of Karanka’s last six.

That run of form has seen Middlesbrough go from relegation candidates to relegation certainties.

Barring an unbelievable upturn in form and results elsewhere going their way, Boro look set to be returning rapidly to where they came from: the Championship.

From Chelsea to Fleetwood?

For many fans, myself included, it was thought we wouldn’t be seeing the likes of Notts Forest and Preston North End anytime soon, yet come August 6th Middlesbrough may well be kicking off their season against one of those two.

If not one of those, it could be Burton Albion, Bolton Wanderers or even, play off results depending, Fleetwood Town. A far cry from the likes of Chelsea, Arsenal, Man City and the rest.

It brings shudders down the spines of many of the fans to think that they will be back in a league they spent seven long years trying to get out of. For many of those seasons the long suffering supporters had to endure the disastrous Gordon Strachan era, as well the ‘so near yet so far away’ Tony Mowbray reign.

It was felt that when they finally clambered out of one of the craziest divisions in the land, they’d be spending a lot longer than one season in the league above, that they’d put down roots at the top table. The good times were back.

But after a summer that saw Middlesbrough bring in the likes of Victor Valdes, Alvaro Negredo, Calum Chambers, as well equalling their transfer record on a promising Marten De Roon, nobody could’ve foreseen what was to come.

It was generally accepted that they would be alright, that they had the better of the squads among the newly promoted teams, survival was to be expected.

Yes there’d be some hairy moments; they’d flirt with the bottom three, but after the last ball of the season was kicked they’d be fine. They had a system, a style of play that had been successful in previous seasons against Premier League sides in cup competitions. Ideal then for keeping them up; frustrate the opposition and nick a goal at the other end. Fool proof surely?

Foolhardy it has proved to be. Middlesbrough have wasted an entire season, wasted a massive opportunity to re-establish themselves among the elite. Had they found themselves where they are yet played with a sense of purpose and ambition, perhaps attitudes would’ve been more positive towards the team. Given it’s been the complete opposite of that, feelings couldn’t be more apathetic.

That lack of enthusiasm and interest in the team isn’t something you could’ve predicted at the beginning of the season, however it’s there and it’s real.

It’s a sad state of affairs when fans want the season over, when they’ve had enough and can’t take it anymore. Yet, that’s where we’re at. The anger has almost gone, nobody has any energy for that anymore.

Questions to be answered

The inquest into the disaster that has been this campaign won’t begin until it’s all done and dusted, when the final whistle goes at Anfield on May 21st.

Until then the players, Steve Agnew, his staff and the chairman all have to play their part in trying to improve the mood of the clubs loyal supporters.

There are questions that need answering for sure, but a show of effort and pride in the meantime will go a long way to getting supporters back onside.

Whatever this season could’ve been we’ll never know. It’s what we do know however that’s most depressing. It’s been frustrating, disappointing, anger inducing, sad, anti-climactic – I could go on. Joyful scenes have been few and far between. In fact we’ve been starved of them, not even drip fed.

Should Middlesbrough stand a chance to bounce back at the first attempt then they simply have to get things right, and quick. If they do, then the aim is to make sure a season like this one is never repeated again.

Good read let’s hope for a better campaign next season.