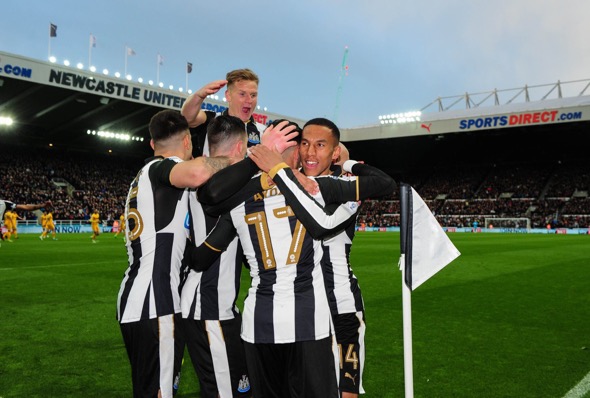 It was a night of joy and celebration for everyone involved with Newcastle United as they clinched promotion back to the Premier League at the first time of asking with a 4-1 win against Preston.

Like they have numerous times this season, Newcastle took early lead when Jamaal Lascelles flicked the ball to the back post where Ciaran Clark was standing. Clark only had to prod the ball into practically an open net but his attempt ricocheted off Ayoze Perez and eventually found its way past the goalkeeper.

It looked like it was going to be a walk in the park towards promotion for Newcastle until Preston suddenly began testing the goalkeeper.

Daniel Johnson was one on one with Rob Elliot but the Republic of Ireland international managed to pull off a good save.

The visitors then crafted an impressive counter attack which begun on the left flank. A cross was whipped into the box towards Jordan Hugill in the penalty area, who then directed the ball past Rob Elliot with his shin. It was the twenty four year olds twelfth goal of the season.

Preston then surprisingly took the game to Newcastle for a large period of the first half stringing several passes together and troubling the back four of football.

In the last minute of the first half Newcastle came up with a counter attack of their own. Isaac Hayden burst through the middle of the pitch and played in Aleksandar Mitrovic’ on the right. The Serbian then cleverly played the ball across goal to Christian Atsu who calmly slotted the ball past Chris Maxwell to regain the lead for the Magpies

The second half really kick-started in the sixty fifth minute when Ayoze Perez acrobatically tested Chris Maxwell between the sticks. Isaac Hayden then followed up but his effort was blocked off the line by the hands of Paul Gallagher.

The midfielder was immediately shown red and Newcastle had a spot kick.

Without any nerves Matt Ritchie stepped up and smashed the ball to the left of the goalkeeper giving him no chance.

Two minutes later a corner found its way to the back post where it came off Perez’ chest and crossed the goal-line. There was no way back for Simon Grayson’s side.

The Magpies managed to see out the score line and secure their automatic promotion place. All players and staff flooded the pitch at the full time whistle.

There was an almighty roar as Rafa Benitez entered the pitch applauding the fans from all ends of the stadium.