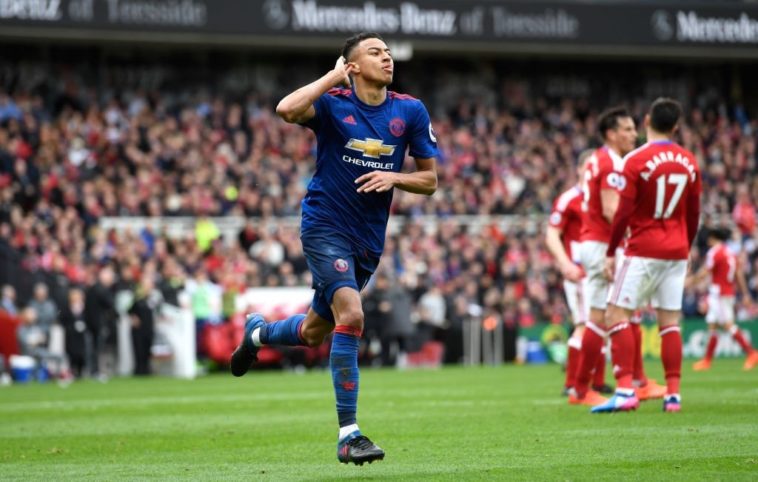 Manchester United beat Middlesbrough 3-1 to move above Arsenal into 5th place in the Premier League.

At times, it appeared to be a battle between the two teams to see who could be the most defensive team on the pitch.

Middlesbrough started the game relatively well, enjoying good possession and trying to get forward but as has been the case all season they struggled in the final third. Gaston Ramirez was Middlesbrough’s biggest threat but yet again Middlesbrough appeared to be more geared towards maintaining a defensive shape.

United’s first chance came through Marcus Rashford who used his pace to get past Bernardo but his shot was straight at Victor Valdes who was able to save Rashford’s effort. From that moment on United targeted the left hand channel and the pace of Lingard and Rashford was causing all sorts of problems in that channel.

The breakthrough came in the 30th minute. Ashely Young had the ball on the left and cut inside onto his deadly right foot to whip in a brilliant cross to Marounane Fellaini who headed into the net from an angle to make it 1-0 to United.

Middlesbrough started the second half in a lacklustre manner, they had more of the ball but they were unable to make headway into the United half and kept giving the ball away to United leading to United counter attacks.

It was from a counter attack that United got their second goal. Jesse Lingard was able to drive into the Middlesbrough half of the pitch with no one getting close to him. Lingard took on the shot from outside the box to blast the ball into the top corner to make it 2-0, a brilliant goal from Lingard.

Middlesbrough immediately brought on Adama Traore and Rudy Gestede. In response Jose Mourinho brought on Marcos Rojo for Juan Mata, sacrificing an attacker to have four centre backs across the back line. At times United were defending with a back six which invited Middlesbrough to launch balls into the United box.

United were eventually punished for their negativity. Chris Smalling failed to deal with a ball sent into the middle which allowed Rudy Gestede to fire in from close range to make it 2-1. United continued in their defensive set up, camped on the edge of their box which was disappointing to see against the lowest scoring team in the league.

Middlesbrough struggled to carve anything clear cut after their goal despite United’s negativity.

Then, deep in stoppage time, a ball forward was chased by Antonio Valencia all the way back to Victor Valdes in the Middlesbrough goal. Everything looked under control, until Valdes slipped as he went for the ball. It allowed Valencia to walk the ball into the empty net making it 3-1.

The goal sparked wild celebration from Jose Mourinho who walked down the tunnel as he celebrated and did not reappear for the remaining 2 minutes of the game.

Manchester United now move above Arsenal into fifth and hot on the heels of those above them in the Champions League positions.

If you support Middlesbrough and are interested in writing, join our writing team.