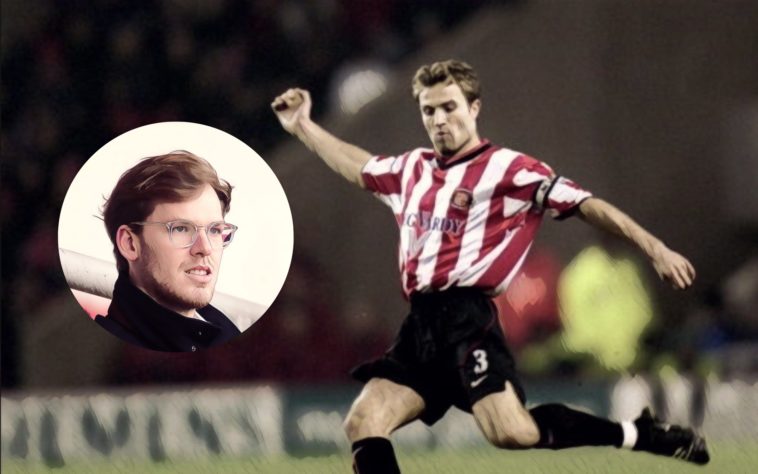 The past five years have been nothing but misery for Sunderland AFC, but a new dawn might be instore for the north east club.

The Black Cats have a new owner after French businessman Kyril Louis-Dreyfus bought the club in February, becoming its new chairman and majority shareholder.

The goal for the club is to return to the Premier League, from which they have been missing since 2017. They are currently spending their third consecutive season in League One, but they sit fourth in the table with a realistic shot at automatic promotion.

Speaking exclusively to The Football Faithful, Sunderland legend Michael Gray believes the 23-year-old Louis-Dreyfus has the right level of commitment and ambition to run the club.

“I was introduced to him by David Jones from Sky Sports, and he seems like a real down-to-earth young man,” reveals Gray.

“He’s obviously enthusiastic. I liked his dedication of how many games he’s actually been to so far, he was going to the games before he actually took over the club. And he’s obviously still doing that now, which is great to see.

“He’s got his heart and soul into it. And he seemed very ambitious, where he wanted to move the club, which direction he wanted to move the club in. And he just said, I just hope everybody’s going to be patient with me. And I think you’ve got to respect that. Because you know, everything is not going to happen overnight, just because this young wealthy man’s come into the club.”

While the new ownership is certainly a move in the right direction, Gray is keen to stress the virtue of patience. The former England international even goes so far as to say it might take an entire decade to get back to where they once were.

“It’s a new takeover, I think everybody’s kind of excited about it. [But no one’s] kind of jumping in and thinking, right, this is it. We’re going to be a Premier League team again in about two or three years time. It’s not going to happen that way.

“It’s going to be a process of maybe even 10 years. Because we know how difficult we’ve found it to actually get ourselves out of League One. And then you’ve got the challenge of the Championship after that. So everybody’s got to be patient. But I think everybody’s optimistic and excited.”

Sunderland fans are hardwired not to get their hopes up. In the past four years alone they have experienced back-to-back relegations, the failed ownership of Stewart Donald and Charlie Methven, and playoff heartache. They know it’s going to take a lot of time and effort – and money.

“With the fan base that we’ve got at the club, the stature that the club has had over the years, there’s no question in my mind that it’s a Premier League club again in the waiting,” Gray asserts.

“But again, you know, it all comes down to that big word, which is patience, because everybody wants success overnight. But some things are worth waiting for.

“This club’s been dragged through the mire for many, many years. We’ve had false promises. We’ve had different ownerships in charge who have put money in the club, if you go back to Ellis Short. but they brought in the wrong personnel and the people who were bringing those players into the club just didn’t have it at heart.

“Now, we’re hoping that Kyril has got the club at heart from what I’ve seen so far. I believe he has. He wants to be a success. He’s put the money on the table. He wanted to buy the club. He wanted to be the main shareholder at the club. And now we’ve got to keep putting his hands in his pockets to bring that success and hopefully the people around him will help him do that.”

Gray was involved in a consortium with a view to taking over the club last year, with the ex-pro on board in an advisory role, but the potential cost of running the club was too great a burden for them to carry.

A local lad who played for the Black Cats for 12 years, he believes that former players such as himself still have a big role to play in the club’s future. After all, nobody else has more intimate knowledge of the turbulence that comes as part of the Sunderland package than they do.

“I know there’s people like Kevin Ball, who’s been involved with it with a club for a long, long time. And he’s got a lot of passion for it. And I think just getting his insight and maybe his background into the way that the club was run can certainly help ownerships and managers moving forward. There’s no doubt about it, because having that information of what’s gone on over the years is absolutely key.

“So I think the direction it goes in, certainly I think ex-players – and I’m not putting myself forward for this at all – but people with experience and people who have the club at heart, they need to get on board as quick as they possibly can just to make sure that we stabilise the club. You’re right, it’s never been a comfort zone playing for a club like Sunderland. There’s highs and lows, and it takes over your life.

“If you live in the area, if you live in the city, you know exactly what it’s all about. It’s pretty much Monday to Friday. You’re looking forward to the game coming up on the Saturday, and after the game’s been played on a Saturday, it’s all you want to talk about. The highs have obviously been jumping into the Premier League and having great success and then the lows have been relegations and heartache.

“And that’s the way Sunderland will always be. But I think it’s about time that the good times roll back.”