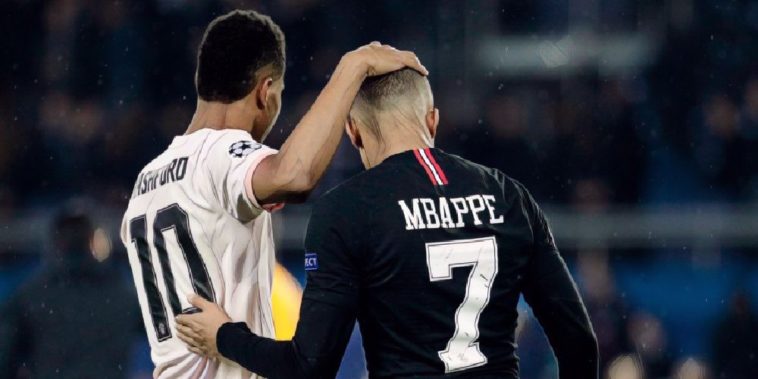 Kylian Mbappe has spoken of his respect for Marcus Rashford and has hailed the forward’s courage both on and off the field ahead of Paris Saint-Germain’s clash with Manchester United tonight.

PSG welcome Manchester United to the French capital as they begin their Champions League campaign, with Thomas Tuchel’s seeking to lift the trophy for the first time in their history after finishing as runners-up last season.

The group stage opener comes 18 months after the sides met in the last-16 of the competition in 2018/19, United prevailing in dramatic circumstances over two legs as Marcus Rashford’s late penalty sealed progress on away goals in a memorable second-leg fightback in Paris.

PSG forward Mbappe has now recalled that meeting and has praised Rashford’s ‘confidence’ in taking the decisive stoppage-time spot-kick, hailing the England international as ‘one of the most dangerous forward players’ in the Premier League and revealing how compatriot Paul Pogba has eulogised about his club teammate.

“When you take a penalty in that situation, how much practice you have put on the training ground doesn’t matter,” Mbappe told the Mirror.

“It’s about confidence and he’s a player who plays with so much confidence.

“He’s one of the most dangerous forward players in England.

“Paul Pogba has spoken about how special he is – and he doesn’t talk about players in such a way often.”

Mbappe has also hailed Rashford’s charity work with the Red Devils forward having campaigned to help end child poverty in the UK, receiving an MBE for his recent work in helping to provide free meals for vulnerable children.

The France international has his own charity, ‘Inspired by Kylian Mbappe’,  which also helps underprivileged children and has spoken of his respect for Rashford’s bid to ‘make a real change’.

“To tackle an issue as important as child poverty is one of the most important things that somebody can do,” said Mbappe.

“So I have full respect that he’s been doing that and trying to make a real change.

“I do think there is a requirement for players to use their position to make a difference in the world. We’ve been given so much and it’s important that we give back.”