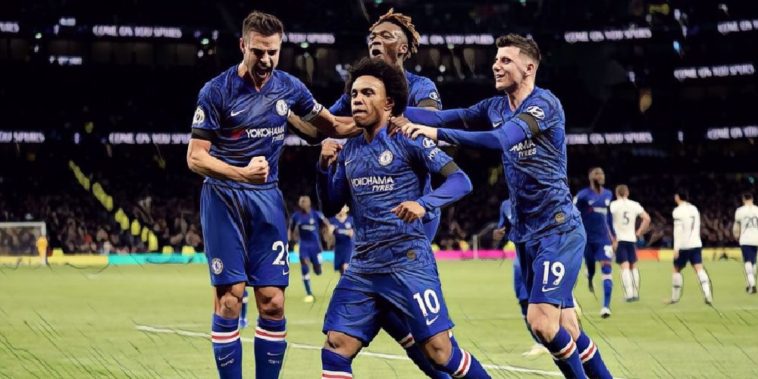 Willian has praised Chelsea’s ‘mentality’ after the club secured a crucial 2-0 victory over Tottenham in the race to secure Champions League qualification.

The Brazilian international scored twice in the first-half as Frank Lampard’s side sealed a precious away victory, extending their lead over their London rivals to six points and cementing their position in the top four.

Chelsea dominated the proceedings for much of the contest, with Willian opening the scoring with a fine effort following a quickly worked corner before doubling the lead from the penalty spot after Paulo Gazzaniga’s rash challenge on Marcos Alonso.

Spurs‘ hopes of a comeback were further dealt a blow following Son Heung-Min’s red card for kicking out at Antonio Rudiger, as Lampard’s switch to a back three paid dividends in a solid defensive showing.

It was a hugely impressive performance from the Blues as they brought an end to a poor run of form, and Willian was full of praise for his side after a dominant away display.

“I am happy with the two goals but the most important thing is to win the game. We did brilliant today,” Willian told Sky Sports.

“I think Spurs expected us to put the ball in the box for the first goal but we did not and by going short we caught them out and it worked. The team’s mentality was perfect.

“I think now we have to keep doing the same. We cannot go up and down, we need to carry on and stay at the top of our form.”