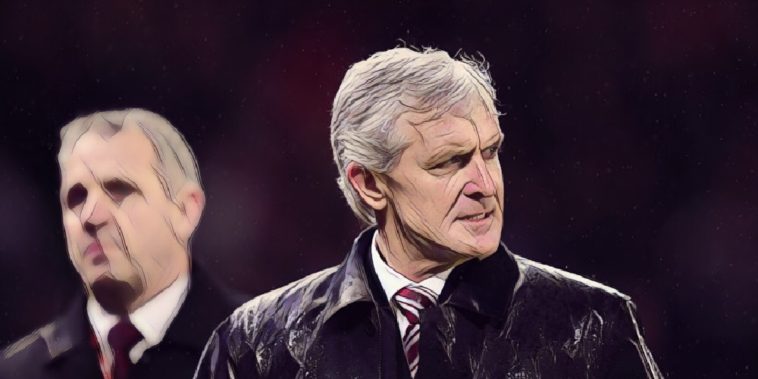 Welcome to Stick or Twist, our weekly column here at The Football Faithful which takes a look at the under-fire manager of the moment and ponders whether they deserve the sack or not.

We will look at factors such as recent form, fan opinion and media commentary, while asking important questions such as ‘Is there a viable replacement available?’ and ‘Is the team just experiencing a dip or are they in an irreversible tailspin?’ This week we take at look at…

When I started writing this column, there was never any doubt that Mark Hughes would be low-hanging fruit for SOT. The former Manchester United forward has been on the Premier League‘s managerial merry-go-round for a long time now, clasping onto a plastic donkey as he rides from club to club up and down the country over the last two decades.

And yet, what has he achieved in his 14-year career in the dugout? Aside from Blackburn Rovers, did he improve any one of Man City, Fulham, QPR or Stoke City during his spell at each of those clubs? At Stoke, he was in the enviable position of having time, money and a talented squad on his hands, but the team went backwards while he was in charge.

On the other hand, Hughes came to Southampton to fight relegation towards the tail end of last season, which he did successfully. He has never been relegated as a manager, thanks to the sweet technicality of being sacked by both the R’s and the Potters before they tumbled into the Championship. And his teams are generally solid, mid-table sides who challenge for European qualification in a good year, QPR and his final year in Stoke excepted.

With that in mind, should the Saints stick with Mark Hughes in the hope that he lifts them back to upper mid-table stability, or twist before they suffer the fate of some of his previous clubs?

Southampton have not won a game since September 1, when they overcame Crystal Palace 2-0 away, their only victory of the season (although they have progressed past Brighton and Everton in the League Cup).

Currently sitting 16th in the table with just eight points, Southampton are two points above the drop zone. The only teams below them are Cardiff City, Fulham, Newcastle United and Huddersfield Town, all of whom have been objectively terrible, meaning Saints are the best of the very worst in the Premier League. Not a place their fans expected them to be not so long ago.

Consecutive 0-0 draws with Bournemouth and Newcastle have stemmed the flow of constant defeats with a pair of decent defensive performances and may be a sign that things are gradually improving, although scoring is an ever-present issue.

An important consideration here is the state of the club; Southampton have been routinely selling their best players year after year without replacing that talent adequately. It is, of course, difficult to replace the quality of the likes of Sadio Mané, Dusan Tadic, Virgil van Dijk and Adam Lallana, to name but a few.

But recruitment has been poor the past few seasons, with big money being spent on Guido Carillo, Mario Lemina, Nathan Redmond, Manolo Gabbiadini and Sofiane Boufal, yet all have flattered to deceive for prolonged periods. Add to that the lack of academy prospects coming through relative to previous years, and you’ve got yourself a squad that needs a lot of work.

These are things not under Hughes’ control and were happening long before he took the job, so it’s fair to question whether or not someone else could do appreciatively better in the same position.

This, however, cuts little mustard with the fans, one of whom sees Hughes’ management of the team as “absolutely unacceptable.

Rob Palmer, a podcaster and lifelong Saints supporter, surmises that he is “more angry at the board than at Sparky”, pointing to the farcical decision to keep Mauricio Pellegrino as manager for as long as they did in 2017/18.

Nonetheless, he believes there are no excuses for the current form they find themselves in:

“You’re right when you say that recruitment hasn’t been great in the last number of seasons. We’ve thrown away money on the likes of Guido Carillo and the oxygen thief extraordinaire that is Sofiane Boufal.

“(But) I think shortcomings in recruitment can be overcome by a good manager who already has a squad of players to chose from. Hughes has a history at clubs of playing ‘his’ players rather than the best options available. His arrogance is what keeps him steeped in mediocrity. He knows best and no one will tell him otherwise.”

Palmer’s biggest gripe is not the lack of goals and attacking output, but the disintegration of a once solid defence:

“Hughes can’t execute a defensive game plan, nor can he make us a goal-scoring force. He is an extremely beige coach who refuses to look inwardly at faults, instead, he’s constantly blaming referees or ‘luck’.

“Stoke, the team who got relegated, didn’t think he was good enough. It’s clear they were right.”

Who Should Be The Next Southampton Manager?

In an ideal world for Saints fans, they would go for David Wagner, whose style best represents what they want to see in their own team. Rob Palmer also suggests Roger Schmidt, but he seems content to earn yacht-loads of money in the Chinese Super League.

Remarkably the favourite to replace Mark Hughes with some bookmakers is Roberto Martinez, the current Belgium boss. Even more remarkably, Martin O’Neill – who we suggested should be sacked by the FAI recently – is just behind him in the betting. Other reasonable suggestions include Northern Ireland manager Michael O’Neill, David Moyes, and Brendan Rodgers.

Sam Allardyce is also relatively high in the betting charts, but it’s hard to see the coastal club resorting to that.

There is an argument that, given the circumstances and decision-making within the club, Mark Hughes deserves time to figure out how to get the best out of this Southampton squad. The problem is, that argument absolutely sucks.

In the book Living On The Volcano, author Michael Calvin writes of how Southampton were scouting Ronald Koeman years before they eventually hired him as manager. The Saints are one of the very few clubs who actually scout managers, but it is one of the things that made them such a well-run Premier League club.

With that in mind, it becomes extremely difficult to understand what they initially saw in Hughes; perhaps it was his top-flight experience, or he was dirt cheap, or maybe he was the last man left on Earth. But once they saw what he could do up close, they bafflingly went and gave him a three-year deal. A club like Southampton has the capability to attract a head coach of a far greater calibre than the Welshman.

Echoing the sentiment of Palmer, the question should not be whether or not Mark Hughes should be sacked or not; we should be looking at the quickest way to shoot him into the sun and away from the Premier League forever.