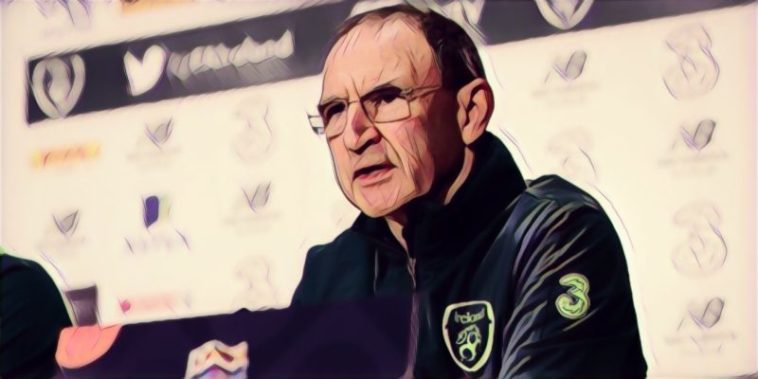 Welcome to the first edition of Stick Or Twist, a new weekly column on The Football Faithful which takes a look at the the underfire manager of the moment and ponders whether they deserve the sack or not.

We will look at factors such as recent form, fan opinion and media commentary, while asking important questions such as ‘Is there a viable replacement available?’ and ‘Is the team just experiencing a dip or are they in a irreversible tailspin?’ This week we take at look at…

The biggest insult inflicted on the Republic of Ireland national football team this week was not as a result of the demoralising 1-0 defeat at home to Wales, but of the travelling fans who taunted them with chants of “you’re just a shit Northern Ireland.” To make matters worse, some Irish fans agreed with them.

Wales fans: 'You're just a shit Northern Ireland'.
Republic fans: 'What's it like to have a Queen?'

For the rest of us looking on it was one of the highlights of a drab match. For Martin O’Neill it was one step closer to the exit door.

There is an argument that the management duo of MON and Roy Keane should have left after 5-1 demolition they suffered at home to Denmark. There can be no comeback from such a crushing defeat.

But in equal measure, they had earned their chance at redemption having reached consecutive playoffs and qualification for EURO 2016. Sadly it has not gone much better since then.

That is how Ireland have fared in 2018: two draws and four losses with a solitary win coming in a 2-1 defeat of the USA.

The most recent loss came against a Welsh side missing Gareth Bale, Aaron Ramsey and Ethan Ampadu, replaced by several youngsters with little or no international experience.

Welsh front six – a 28 year old, three 21 year olds, a 19 year old and an 18 year old. Four of them playing in the Championship this season, 1 in Prem League and another on loan in Holland. Harder to spin that result.

That game is the latest in a long list of matches that have shown the weaknesses and shortcomings of this Irish side.

The once tight defence for which MON’s charges were commended has fallen apart — a clean sheet against Denmark was presaged by a 4-1 hammering by Wales. That consolation goal is the only time Ireland have netted in the Nations League thus far.

There was, of course, a certain level of misfortune in drawing the Danes and the Welsh, both very familiar with Ireland’s style and holding zero fear of what they offer. But the one thing MON could point to in his defence until now – getting results – has vanished.

Ireland are earning 0.3 points per game, with relegation to the third tier already confirmed. To put the situation in further context, Gibraltar currently have a better chance of qualification than the Irish do.

What Is The Manager Saying?

That’s what Martin O’Neill told Sky Sports after the game. Does even he believe that at this stage?

MON’s spin is no longer doing the job. After playing Cyrus Christie, a full-back, in midfield against Denmark, he pointed to the fact that the Fulham player won the Man of the Match as vindication for the decision, despite it being obvious to everyone with eyes that he hadn’t a clue what to do. His excuses are almost desultory to the intelligence of the Irish footballing public.

O'Neill also questioned whether the boos at the end were for the referee, rather than him

“We’re lacking that technical ability, we have a lot of spirit, but that will only get you so far. We need to eke out more goals and we need to be more creative than we are.”

No one would deny that Ireland struggle to produce players with proficient technical ability. But O’Neill is starting to sound more and more like Giovanni Trapattoni with every passing day. Comments such as these show a lack of faith and belief in the personnel available, and are truly shown up to be nonsensical when a Welsh U23 side come to your home ground and boss the game.

To boot, can anyone really be surprised about the poor technical level of our play when the manager persists with players like James McClean, while leaving out tidy passers such as Conor Hourihane?

If MON has any friends left in the media, they’re being extremely quiet right when he needs them, because the critics are out in force this week.

We are dreadful. Long-term and short-term problems coming home to roost. A squad this bad – the worst in decades – has been in the post a long time due to structural issues, but also think O’Neill/Keane had stalely run its course. ??

Former Ireland international Keith Andrews was a pundit for Sky Sports on the night, slamming the lack of a tactical plan from O’Neill, exclaiming the players “don’t have a clue what they’re doing.”

'We're all John Wayne in our own story. Until, that is, someone comes along and convinces us that, no, we're actually Marion Morrison'

Why do we employ managers (Trapattoni & Martin "technically short" O'Neill) who talk down our players?

Gavin Cooney of Balls.ie, meanwhile, wrote that not only is the O’Neill era finished, but the Irish team might even be something not worth caring about anymore. Ouch.

“Grim” was the initial reaction from Irish Football Fan TV on Tuesday evening, a fairly accurate summation of the state of things as they currently stand.

While there are some defenders of Martin and Roy out there, the vast majority of fans are demanding a change in the dugout.

Last time I was back in Ireland heard one fan put it: "What's so depressing about the Irish soccer team is we're not only shit now, but we're going to be shit for probably another 10 years." https://t.co/PenZORxkuV

It’s hard to fathom why over 41,000 people paid to watch Ireland face Denmark on Saturday, although the crowd was much smaller than that for the tie with Wales. Their also appeared to be a lot of free tickets floating around before kick-off, a sure sign that the FAI are struggling to entice football fans to the ground.

It’s looking as if Ireland are heading towards a similar scenario they encountered with Trap, when fans voted with their feet and stopped turning up to matches.

Can he turn it around?

When Louis Van Gaal threw on every Dutch striker known to man to claw back their 1-0 deficit in a World Cup qualifier against Ireland at Lansdowne Road in 2001, he was widely criticised for “making really dumb tactical errors.” It cost him his job.

Fast forward seventeen years and Martin O’Neill threw on all of his strikers to claw back a 1-0 deficit in a crucial Nations League match against Wales at Lansdowne Road, with the same result.

Unlike Van Gaal (until 2012), MON may get one more competitive game in his tenure to prove he has got what it takes to turn things around, but that fixture is a dead rubber against Denmark in November.

If he does get that much, he will have to prove that accusations of a lack of coaching and preparation are wide of the mark. In 2014, Aiden McGeady claimed he didn’t know which position he was meant to be playing in against Germany, while Christie said as much after Tuesday.

The 3-5-2 formation is one he has flitted between on several occasions this year, abandoning it before resurrecting it for big games. Chasing a goal the formation changed to a 4-3-3 – with Shane Long as a winger – which Ireland have not tried all this year.

Who even knows what plan MON would unleash to try and prove they’re not a Shit Northern Ireland when they face their neighbours next month.

Question for the FAI now isn't whether Martin O'Neill can turn our sorry run around, it's whether anyone wants to see him try.

There are three names that continually get mentioned in connection with the Ireland job: Brian Kerr, Mick McCarthy and Stephen Kenny.

The first two have already had a go at the job, while the latter (albeit a very good coach in my mind) seems like a bit of a populist choice. Kenny’s name is thrown out there by people who seem to have little affiliation to the League of Ireland or idea what type of football he would implement. How well would he adapt to the international scene?

Chris Hughton is another popular choice; an Irish legend with a very good pedigree in management. Barring a disaster between now and the end of the season however, there is no chance Hughton would leave Brighton at the moment.

Brendan Rodgers is my personal favourite, considering the type of football he likes to play, and his Irish connection might put him in our favour, but similarly to Hughton it is hard to see him taking a, let’s be fair, demotion at this stage in his career.

The list of candidates beyond that is… not entirely enticing, leading us to the familiar question of “who would do a better job?”, although Marcelo Bielsa at 66/1 is both brilliant and hilarious.

Ireland has a fixation on the manager when it comes to the national side, and calls for the manager’s head are never more than a bad result away. There is often a lack of nuance in these arguments, ignoring the greater structural obstructions to the job that one man in a dugout can’t fix by himself.

To those calling for a management change. The manager is chosen by leadership. Leadership are heavily in debt, with big cashflow problems & a shiny new contract they'd need to pay out.

Our problem is the dictatorship at the helm of Irish football. Forget fucking Martin O'Neill.

There are mitigating circumstances to the current state of the Ireland team; an awful squad compounded by the lack of a truly elite development system, thanks mostly to FAI CEO John Delaney. And it’s only getting worse as time goes on; before we fretted about replacing the likes of Damien Duff, Robbie Keane and Shay Given, whereas now we’re struggling to replace players like Wes Hoolahan and Daryl Murphy.

That is quite a tide to swim against, but there is still a feeling that MON’s tenure has run its course.