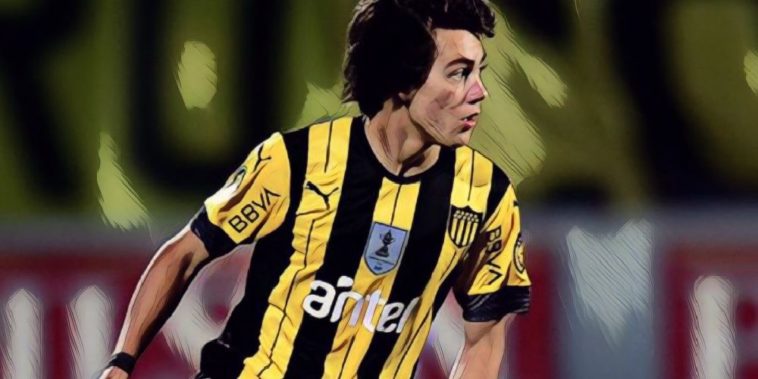 Manchester United are monitoring Uruguayan teenager Facundo Pellestri as the club seek emerging talent to reinforce their squad ahead of next season.

Ole Gunnar Solskjaer has compiled an extensive list of potential targets ahead of the summer window and the club’s South American scouting network have been impressed by the performances of Pellestri, the 18-year-old currently starring for a Penarol side managed by former United forward Diego Forlan.

According to The Athletic, the winger is also being tracked by both Manchester City and Real Madrid, though United are in an advantageous position given Forlan’s recommendation of Manchester United.

The Uruguayan believes his former side are a great club for a developing footballer, praising the ‘stable football environment’ despite a difficult personal period during his own time in English football, and is said to still be on ‘good terms’ the current United boss.

Pellestri – who speaks English and possesses a Spanish passport – is ‘extremely quick’ and capable on playing on either flank, his two-footed ability and desire to run at opposition defenders seeing him already emerge as an important part of Forlan’s Peranol side, though he is ‘far from the finished product’. His contract with the Montevideo based club has two years to run, and has a release clause of a very attainable £10 million.

Solskjaer is believed to be centre of all recruitment discussions at Old Trafford and talk of the Norwegian solely wanting British talent is wide of the mark, the Red Devils keen to recruit the best talents possible as they bid to build a side capable of challenging for the Premier League title.

The previous tendency to seek marquee arrivals such as Angel di Maria has been replaced by more measured and methodical planning, the interest in Pellestri an indication of the club’s desire to build for the long-term and a patient approach to Solskjaer’s rebuild.

Despite the impressive recent form of Mason Greenwood on the right-hand side, it remains a position in which the club want to strengthen, with Borussia Dortmund’s Jadon Sancho their number one target with Greenwood’s long-term position believed to be in a more central attacking role.

Sancho’s asking price – which would likely represent a new British transfer-record – makes a deal complicated for the England international, however, and United’s recruitment strategy sees the club compile list of three top targets for each position being sought.

The Athletic are also reporting that United, alongside Manchester City, have ‘expressed their interest’ in Bayer Leverkusen winger Leon Bailey. The Jamaican international has been routinely linked with the Premier League in recent years and is believed to be on the wish-list of several sides, the 22-year-old another exciting prospect capable of playing on either flank.

The winger has scored seven goals in all competitions so far this season and is believed to be valued at around €30m by the Bundesliga side, though United could face competition from a City side who may be in the market for a replacement for the departed Leroy Sane.