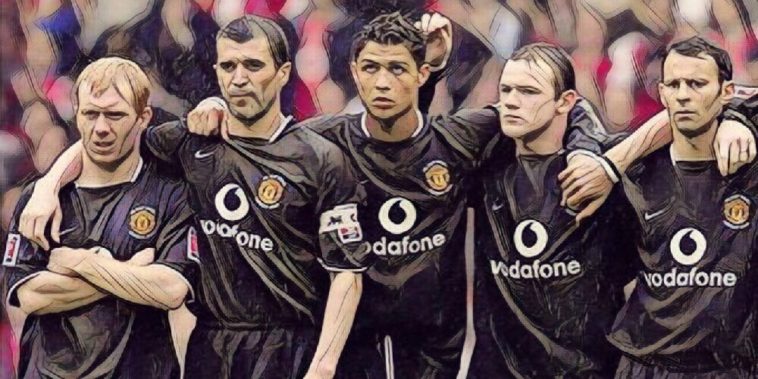 Manchester United are the undisputed kings of the Premier League era, having won 13 top flight crowns since the EPL’s inception in 1992.

Much of the Red Devils success was down to a core group of players that Sir Alex Ferguson was able to trust completely and so it’s no surprise that Man United’s top five appearance holders were all pivotal players throughout his tenure.

You’ll often hear people say that a captain is his managers voice on the pitch, well Roy Keane was that and a whole lot more. He was his fists, his teeth and his crunching knee high challenge too.  Those who played with and against the Irish midfielder agree that he was one of the best players to ever pull on the red shirt and his drive and determination to succeed and win helped United to seven Premier League titles, four FA Cups and of course the Champions league in 1999.

He was suspended for the final but it was his heroic display against Juventus that booked his side a place in the final.Were it not for injuries and a fiery temperament, he would certainly have managed many more appearances.

TO CHECK OUT 10 OF THE BEST QUOTES ABOUT ROY KEANE CLICK HERE !

Hopefully when people look back on his career people will appreciate what a legend Wayne Rooney was for Manchester United. While he obviously started and now seems to be finishing his playing days at Everton, he spent the majority of his career at Old Trafford.

He racked up a very impressive 393 appearances in the Premier League, scoring 183 goals along the way. In total he played 559 times for the Red’s, becoming their all time leading goal-scorer with 253 and won 5 league titles, four FA Cups, 1 Champions League and 1 Europa League. If he had played for Arsenal, they’d have a statue up already.

TO CHECK OUT 10 OF ROONEY’S BEST GOALS CLICK HERE !

Now we’re getting in the heart of that core group of players we talked about. The Class of 92 as they would go on to be called. Is Gary Neville the 3rd best player United ever had? Not by a long way, but he was Man United through and through, made himself the very best player he could possibly be and was as reliable as they come.

400 league appearances and just over 600 in total show how valuable he was to Sir Alex Ferguson and 8 league titles, 3 FA Cups and 2 Champions league medals prove that as the song goes, Gary Neville is a Red.

Paul Scholes was so good he only ever played for one club, Manchester United, and he played for them twice. He scored goals, scrappy ones and thunder-bolts, he sprayed passes around the pitch, long sweeping diags and dinked chips over the top that no-one saw coming, he fouled people left-right-and-centre, because apparently he was just bad at tackling and because he was such a living legend that was ok, (he knew exactly what he was doing), but most of all he won stuff. 11(!!) Premier Leagues, 3 Fa Cups, 2 Champions Leagues and countless other smaller prizes over 19 years at the top level. What a legend.

Of course it’s Ryan Giggs. Giggs’ numbers defy belief. He might not be the all time Premier League appearance holder, that honour falls to Gareth Barry would you believe, but Giggs did it at Manchester United where he was a key figure in the most dominating period of their history. Let’s be honest, Giggs could probably do a job at West Brom as well these days if he really wanted to!

632 appearances is phenomenal but again that’s just in the league, in total he got his boots dirty 963 times for Manchester United winning 13 Premier League Titles, 4 FA Cups and 2 Champions Leagues. There’ll never be another like him.

TO CHECK OUT OUR TRIBUTE TO GIGGS CLICK HERE !