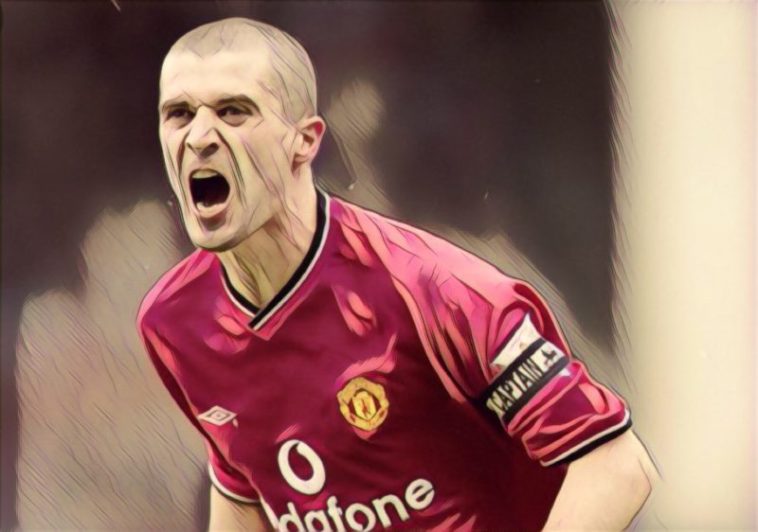 Roy Keane will go down in history as one of Manchester Uniteds and the Premier League’s greatest ever midfielders.

The Republic of Ireland international was the rock on which Sir Alex Ferguson built his domination of English football in the late nineties and early noughties.

Keane has often been described as an inspirational leader and world class player by this who knew him best.

”He was a great player, beyond question. A midfielder of extraordinary tenacity and box-to-box dynamism, with a ferocious tackle and an underrated ability to use the ball astutely. But perhaps his greatest gift was to create a standard of performance which demanded the very best from his team. There wasn’t a player at United who could match Roy’s influence in my time at the club.” Gary Neville.

“He looked like a Manchester United player as soon as I saw him. We played him at Forest and the way he played told me a lot about the lad. His determination, his energy, his attitude to losing and winning told me something about him before we even got him. With Roy Keane present, keeping the ball was never a problem. I said so from the minute he came to the club. ‘He never gives the ball away, this guy,’ I told the staff and players.” Sir Alex Ferguson.

“He led by example on the pitch, got the best out of other players, had great energy and could take a game by the scruff of the neck. If things weren’t going well, his attitude would change that.” Robbie Keane.

“If I could pick one player in my team, I would always pick Roy Keane, in front of any other players I’ve played with. Keano had everything; he was a leader, a great player, and probably the best I ever played with.” Ole Gunnar Solskjaer.

“With Roy, I knew he was a great footballer but until I played with him didn’t realise how great. His passing was probably the best I’ve played with. In terms of getting it in to the forwards’ feet. I had associated him with someone who got round the pitch, making tackles, but it was his passing that blew me away.” Wayne Rooney.

“I remember my first training session: I got the ball from the keeper, I passed it to Gary Neville at right back and Keane just exploded, saying: ‘You passed it sideways, that’s the easy pass! You’re not at Leeds or West Ham now!’ At the time I thought: ‘What’s he talking about?’ Then when I got home, I sat and thought about it and thought: ‘Yeah, you’ve got to try and affect the game’. Rio Ferdinand.

”The fans will be upset because they loved him down there – and so did I when I played there. He was a great leader. The best thing about Roy Keane is that you knew where you stood with him. If you did something wrong he’d tell you but if you did it right then he’d also tell you – in his own way. Every player looks up to him for leadership.” David Beckham after Keane left United for Celtic.

“Roy was unbelievable to play alongside and someone you could always trust. I soon learned that if you weren’t on your game he would be on top of you to make sure you were playing your part for the team. I had a few bollockings from him, but that made you work harder to avoid them. He was a great leader and captain: he drove us on and he was our manager on the pitch.” Paul Scholes.

“What I like about him is the fact that he wouldn’t talk; he’d take the kick, he wouldn’t say anything, then, on the next one, he’d give it to you and he would expect, of course, that you say nothing. He’s not the kind of player who talks a lot.  So he’ll take the kick, he will give back, but I like him – he’s quite fair. We had similar qualities as players. We were both determined, we wanted to win, and we were both leaders of our teams. That’s why I always loved to play against him. [ . . . ] despite the rivalry, there has always been respect between us. We challenged ourselves, we battled, but we always retained respect for each other.” Patrick Vieira, who famously had this epic tunnel bust up with United’s captain …

“Roy’s obsession with winning and the demands he put on others made him the most influential player in the dressing room. He became a great captain through that and, to my mind, he is the best player I have had in all of my time here. Over the years when they start picking the best teams of all time, he will be in there.” Sir Alex Ferguson.