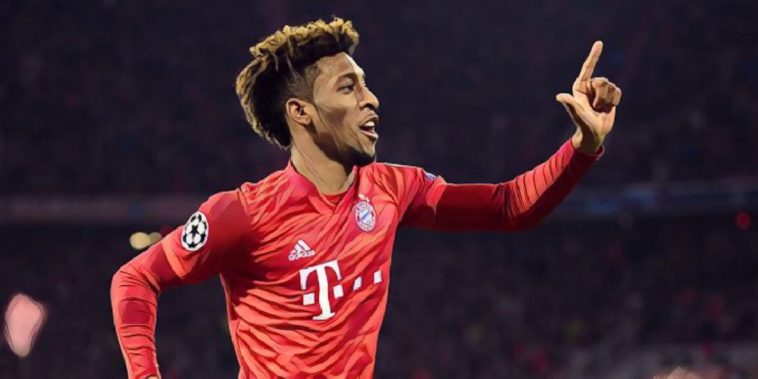 Manchester United are reportedly interested in Bayern Munich’s Kingsley Coman as an alternative to Jadon Sancho.

United‘s interest in the Borussia Dortmund winger is one of the worst kept secrets in football, the 20-year-old having been installed as the club’s number one target as Ole Gunnar Solskjaer looks to strengthen his attacking options in wide areas.

The Bundesliga side are believed to be willing to let him move on, though they have been adamant that the England international will not be leaving on the cheap, their asking price said to be around the £100 million mark, even with the ongoing pandemic and resulting financial downturn.

According to The Athletic, United have lined up Bayern Munich’s Coman as an alternative, and have apparently ‘discussed’ the possibility of the 24-year-old moving to Old Trafford permanently or on loan.

The Frenchman has featured 35 times for the Bavarian outfit this season, scoring seven goals and assisting seven, though the report claims that the recent arrival of Leroy Sane from Manchester City could knock Coman down the pecking order’ at the Allianz Arena, a situation that United could try to take advantage of.

However, according to Christian Falk, Head of Sport at German publication, Bild, Bayern are not interested in doing a deal for Coman, and recently rejected the opportunity to include the pacey winger in the deal with saw Sane move from the Etihad, the former PSG and Juventus attacker having been signed by Pep Guardiola during his time in charge of the German giants.