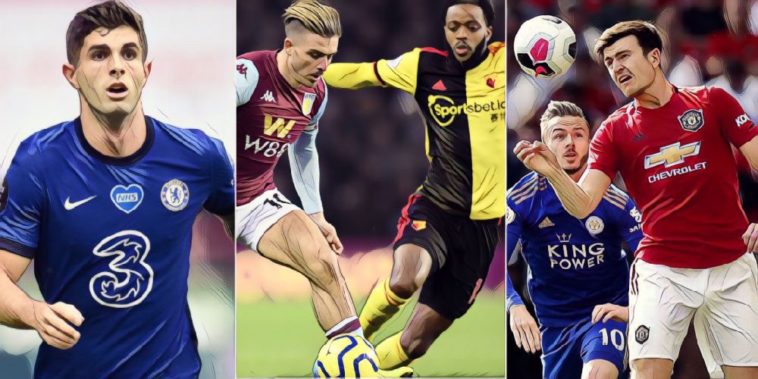 It may well be over two months late, but the Premier League finally draws to a close this weekend, and there is still plenty to be decided at each end of the table.

There was loads of talk during football’s hiatus about games behind closed doors, neutral venues, and potential curtailment of the season, but since the action got back underway last month, it has gone off without a hitch.

Now, with the season set to finally come to its delayed conclusion this Sunday, here are the permutations at the top and bottom of the table, with five games having something riding on them.

The race for Europe

Somehow, after all their early-season struggles, the 1-1 draw midweek with West Ham saw Manchester United move up to third in the league, putting Champions League qualification firmly in their own hands. However, with Ole Gunnar Solskjaer’s side travelling to the King Power stadium to take on Leicester, the same can be said of their fifth-placed hosts.

The two sides are separated by just a point, meaning that a draw would be enough for United to secure a place in the top four, though they could get away with a defeat to the Foxes, but only if Chelsea lose their game against Wolves.

Their lacklustre displays against Chelsea and West Ham will be of some concern to Man Utd supporters though, Solksjaer having largely relied on the same starting XI since the restart.

? Ole on #LEIMUN: "We just have to go and perform to a high enough level for us to get a result.

Chelsea‘s 5-3 defeat to Liverpool in midweek saw them leapfrogged by United, the Blues now sitting behind the Red Devils on goal difference.

They come up against a Wolves side who have proven to be no pushovers this season, and still have something to play for themselves. However, with one of Leicester or Man Utd guaranteed to drop points, Frank Lampard’s side will secure Champions League football with a draw at Stamford Bridge.

A win for United in their game in the East Midlands would also secure Chelsea’s place among Europe’s elite next season, regardless of the result against Nuno Espirito Santo’s side.

A fine start to the season saw Leicester looking like dead-certs for the Champions League, though a run which includes just five league wins in 2020 has seen them surrender a once healthy advantage, slipping outside of the top four going into the final game.

Simply put, Leicester can guarantee they finish in the top four by beating the Red Devils, while a draw would be enough if Chelsea are beaten by Wolves by the virtue of goal difference.

Looking ahead to next season in Europe ?

“Whichever (European) competition we’re in, we have to improve the quality and mentality of the squad next year.” pic.twitter.com/qNvIHRCSyH

Champions League football is just out of reach for Wolves following the dropped points against Arsenal, Sheffield United and Burnley since the restart, and they still need a result to ensure European football returns to Molineux next season.

A sixth-placed finish would see them enter the Europa League second qualifying round, while they could be propelled straight into the group stages if Chelsea were to win the FA Cup next month.

To secure a sixth-placed finish, they need to at least match the result of Spurs against Crystal Palace.

Spurs hopes of European football are partially reliant on Chelsea getting something from their game against Wolves, Jose Mourinho’s side needing to better the result of the Black Country club to move into sixth themselves.

If they were to finish seventh, then Spurs’ European hopes would once again rest in Chelsea’s lap, with an extra place in the Europa League becoming available if Frank Lampard’s men lift the cup on August 1st.

13 goals in 18 appearances under Jose Mourinho.

Sheffield United have been the surprise package of the season since their promotion from the Championship last season, though have fallen out of European contention following back-to-back defeats to Leicester and Everton.

Burnley and Arsenal are also too far back to qualify for Europe through their league position, though the Gunners can earn a place in the Europa League with FA Cup glory, a silver lining on what has been the worst league season for the north London club since 1995.

Mikel Arteta on adding creativity to the team in the transfer window: “That is one of the areas we can improve, but also, how important those players are will depend on the way we are going to attack, because some different teams do it differently.” [Sky] #afc pic.twitter.com/dtoSacwgEu

Five years of Premier League football at the South Coast club looks like it could come to an end this weekend, though there is still a glimmer of hope.

The Cherries need to beat Everton at Goodison Park on Sunday, though they will also need a massive favour from both Arsenal and West Ham in their games against Watford and Aston Villa respectively.

If the Hornets and Villains both lose, Eddie Howe’s side would survive with a win by the virtue of goal difference.

Having looked dead and buried under their first two managers of the season, Nigel Pearson’s arrival helped steer Watford out of the drop zone and to the brink of safety, so of course, they sacked him with just two games to spare.

The Vicarage Road outfit go into their game against Arsenal knowing they need to better Villa’s result to extend their stay in the Premier League.

This is actually going to keep Villa up and send Watford down. Madness. pic.twitter.com/SUTIcz2ylR

If both teams match each others results, then Watford would need to beat Villa’s score by two goals, with Dean Smith’s side having the advantage of both goal difference and goals scored.

If both side’s draw their final game, Villa would condemn Watford and Bournemouth to join Norwich in next season’s Championship.