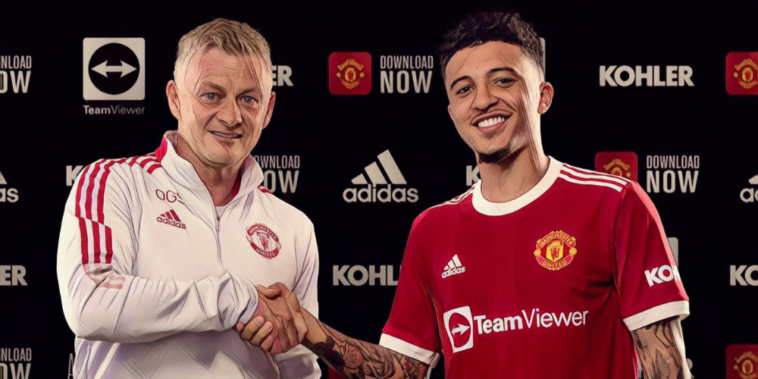 Manchester United have officially announced the signing of Jadon Sancho from Borussia Dortmund.

The deal for the England international has been agreed for several weeks after Dortmund accepted a bid of £72.9m for the winger, with the Red Devils having made the signing of Sancho their number one priority following a failed pursuit last summer.

The 21-year-old has signed a five-year contract with the option for a further year and becomes the first major signing of the summer for Ole Gunnar Solskjaer.

Sancho returns to the Premier League after four seasons in the Bundesliga, having left Manchester City for Dortmund in search of regular first-team football in 2017.

This is his home.
This is where he belongs.

The star developed into one of the most exciting young talents in world football at the Westfalenstadion, scoring 50 goals and providing 64 assists in just 137 appearances for the German side.

Speaking to the club’s official website, Sancho has described his move to Old Trafford as a ‘dream come true’.

“I’ll always be grateful to Dortmund for giving me the opportunity to play first team football, although I always knew that I would return to England one day. The chance to join Manchester United is a dream come true and I just cannot wait to perform in the Premier League.

“This is a young and exciting squad and I know, together, we can develop into something special to bring the success that the fans deserve. I am looking forward to working with the Manager and his coaching team to further develop my game.”

Ole Gunnar Solskjaer has also given his verdict on the new arrival and believes Sancho will become an ‘integral’ part of the Red Devils’ squad for seasons to come.

“Jadon epitomises the type of player I want to bring to the club, he is a forward player in the best traditions of Manchester United,” Solskjaer said.

“He will form an integral part of my squad for years to come and we look forward to seeing him blossom. His goals and assists records speak for themselves and he will also bring tremendous pace, flair and creativity to the team. ”