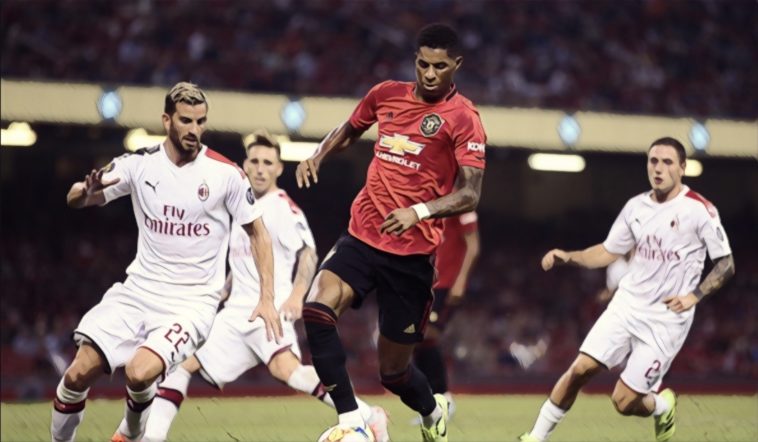 Manchester United taking on AC Milan in the Europa League on Thursday should serve as a cautionary reminder for all the giants of European football: you’re never too big to land right on your arse.

It wasn’t so long ago that these two teams were the cream of the continent, taking part in six Champions League finals between them between 2003 and 2011. In more recent times just qualifying for the competition has been a struggle for these once imperious sides.

Over the past decade the two clubs have been on a very similar path, their trajectories nosediving as dramatically as Football Index’ stock. Their fall from grace has seen neither team win a league title in eight years, but the parallels don’t end there.

Milan and Man United’s experiences have rather mirrored each other this season. Both have enjoyed something of a resurgence recently. Both have put up a challenge for the title in Serie A and the Premier League respectively, their best chances of winning the league for a long time. And both fell away just as it seemed they could genuinely do it.

Now they’re both facing each other in a secondary competition in Europe.

There is no doubt, though, that AC Milan have endured the harder fall. Unlike United they have not had the comfort blanket of a massive broadcast deal that the Premier League enjoys. If anything, the Italian top-flight has diminished in status over the same time, which hasn’t helped.

That has lead to Financial Fair Play problems, which saw them barred from European competition for one season, far few trophies, a plethora of mediocre players, and an iconic stadium in decay (although United fans would argue Old Trafford isn’t much better).

Despite not really challenging for the only two trophies that matter in Manchester, the club’s profits continued to rise and rise – until the pandemic at least – as they signed more official global lubricant and mattress partners to their suite of sponsors. And they say football has lost its romance.

Although the respective fanbases demand so much more, the recent return to some semblance of stability for both clubs is welcome. It has put both sides in a position to comfortably qualify for the Champions League while competing for a European trophy.

Under Ole Gunnar Solskjaer and Stefano Pioli, United and Milan lack world class managers, but do possess two men putting them back on the right track. The ultimate aim is to return to that golden period during the noughties where they dined at the top table. But that table might be completely overturned by the time they get there.

Judging by recent comments made by Juventus chairman Andrea Agnelli, the much-maligned European Super League is on the way. Or at the very least the Champions League will be completely altered with rule changes that could lock in the same 20 or so teams in perpetuity. It’s essentially the NFL-isation of European football.

This very much concerns Thursday night’s opponents in Manchester. With Champions League qualification far from a certainty in recent years, both clubs crave the consistency of a guaranteed spot in a revised competition and the gargantuan cheques that come with it.

We like to think football is a meritocracy and you get what you deserve, in the main. Neither Milan nor United have played well enough in recent years to warrant that level of consistency when it comes to Champions League football, but they feel entitled to it.

Then again, it’s a shame that it’s been 11 years since these two massive clubs have faced each other. On top of that, it’s the first time they will meet outside of the European Cup; the Europa League feels like an unworthy stage considering their status, judging by past standards anyway.

As they get set to face each other, it’s just unfortunate that former PSG teammates Edinson Cavani and Zlatan Ibrahimovic, two veteran strikers both clubs have depended on for goals this season, will miss this one. I guess the analogies had to end somewhere.