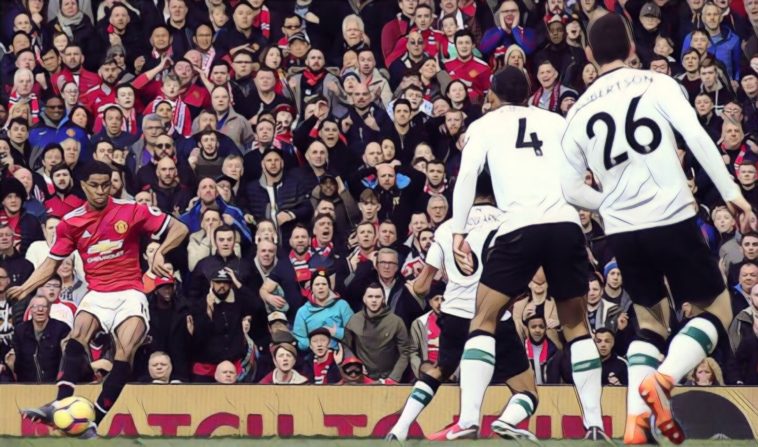 Marcus Rashford’s first half brace led Manchester United to victory against Liverpool, giving them a five-point lead over their old rivals.The young Englishman made his first start since Boxing Day, and with Anthony Martial out injured, and Alexis Sanchez struggling for form, he gave everyone a timely reminder of his abilities. Fourteen minutes in, he had scored, latching onto a Romelu Lukaku flick, turning Trent Alexander-Arnold inside out, and hammering an unstoppable shot home. Ten minutes later, Rashford made it two, and Jurgen Klopp’s side looked nonplussed. Midway through the second half, Liverpool pulled one back through a hilarious own-goal from Eric Bailly. The damage, however, was done, and United saw out the game without giving Liverpool a real chance to draw level.

The last time the young Englishman scored a brace, it was on his Premier League debut against Arsenal. Since the arrival of Sanchez, he has been a more marginal figure on the pitch for United, but was irrepressible on Saturday. Alexander-Arnold was left in knots, and Rashford’s pace provided a key outlet on the counter-attack for Mourinho’s charges.

His finishing was sublime, with his attempts being the only two United had on target all game, leaving Loris Karius helpless each time. With the variety of options available to United up front, Rashford laid down a marker and made a statement. He should be the first name on the team sheet for their Champions League clash with Sevilla on Tuesday.

Mourinho had clearly identified Dejan Lovren as the weak link in Liverpool’s centre-back pairing, as from the start, Lukaku did his best to line up against the Croatian. The Belgian forward bullied his opponent, outmuscling him in the air and on the ground. Both United goals came from Lukaku winning aerial battles against Lovren, until Liverpool finally switched around and had Virgil van Dijk mark the forward on goal kicks.

This will have stung, particularly since Lovren came out swinging in the media beforehand, goading United about their perceived lack of attacking flair, and about his own good recent form. This performance piled onto what has been a disappointing season for the centre-back.

Another centre-back who has had a disappointing season is Eric Bailly, though for completely different reasons. The Ivorian has had an injury hit campaign, and today was his first start in months. Comical, backheeled own-goal aside, he brought an immediate presence to the United defence, throwing himself into tackles, marshalling the backline, and showing why he is so highly regarded, including a lovely 360 turn past a bemused Mo Salah in the first half. United’s backline looked the best it has been in months, and it unsurprisingly coincided with Bailly’s return.

After the game, Mourinho talked about control, and ensuring that United had it even when Liverpool were in possession. From his defensive shape, it was evident. United’s backline afforded Liverpool’s heralded forward trio no time and space on the ball, and were willing to forego a high-press in order to get numbers in vital defensive areas.

Salah had one his quietest days of the season, Sadio Mane was dropping deeper and deeper to pick up the ball, and Firmino was forced to look for space on the wings. Mata and Rashford were willing to drop deep to aid their fullbacks, further clogging the space which Liverpool need to thrive.

Mourinho’s side were careful in possession as well, even on the counter. Nemanja Matic and Scott McTominay rarely ventured too far forward, leaving the fast counters to Rashford, Lukaku, Mata and Sanchez. In the second half, when Liverpool were beginning to gain a foothold on the game, Marouane Fellaini was brought on to serve as an extra outlet and midfield destroyer. Klopp’s men could not find their way through whatever tight spaces existed, and in the end, David de Gea had one of the quieter games he’s seen all season.

The lack of pressing on United’s end meant that though Liverpool’s forwards were starved of time and space, it opened up for the midfield. Unfortunately for the Reds, their midfield put in a collectively unimpressive ninety minutes.

Simple passes were misplaced, communication breakdowns were commonplace, and their simply kept running themselves into the wall of United defenders. Klopp deduced that a more delicate touch was needed, but even the introduction of Adam Lallana could not swing the game Liverpool’s way.

The summer arrival of Naby Keita should help add more dynamism and guile to Liverpool’s midfield, but until then, their Champions League opponents will be looking at this game as the blueprint to beat them.

CHECK OUT HOW THE PLAYERS RATED