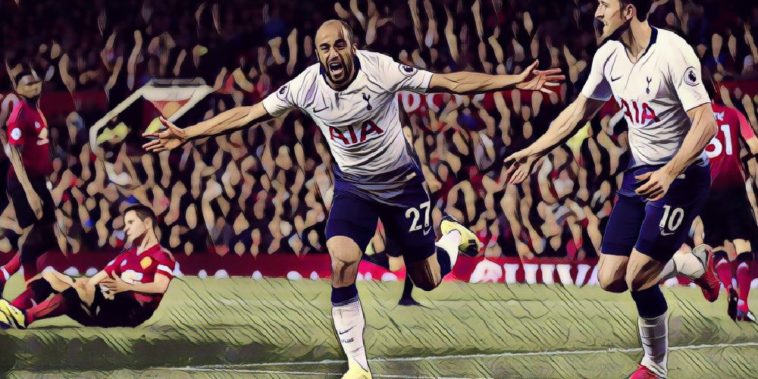 Lucas Moura’s second half brace, along with a Harry Kane header, guided Spurs to a commanding win against Man United.

The scrutiny on Jose Mourinho and Manchester United will intensify tenfold, as they meekly crumbled to a home defeat to Spurs. After a back-and-forth opening half, with United arguably the better side, Spurs struck twice in three second-half minutes through Kane and Moura. United were left reeling, and Moura finished them off by driving through the heart of United’s defence and beating David de Gea in a one-on-one. At the final whistle, Mourinho looked on, stone-faced, while Mauricio Pochettino and his players celebrated a monumental victory.

Here are five things we learned from the game…

Sacked in the morning?

Mourinho put on a brave face during the press conference after the game, insinuating that there were no issues between him and the dressing room. He focused on his side’s good first half, claiming that from a strategic and tactical point of view, they had not lost the game. But it is hard to argue with a 3-0 scoreline, and in the end, the board clearly did not back Mourinho over the summer.

It is a curious situation, where he was not given the signings he wanted, but was also not fired. The club, teetering on crisis before this game, will now be in full-on panic mode. Spurs’ fans were chanting “Sacked in the morning” at the Portuguese manager, and no one would be surprised if they were right.

Much was made of Spurs’ lack of signings in the summer, particularly with Heung-Min Son away on Asian Games duty with South Korea. The general consensus was that Pochettino’s team would stagnate without an influx of new talent. Moura has temporarily allayed those fears, having started the season in stunning form.

His speed, pressing and directness are giving defenders headaches, and United could not deal with him here. The January signing is looking like good value, and almost feels like a brand new player after being given half a season to integrate himself into the team.

After the shocking result away to Brighton, and the poor performances from Eric Bailly and Victor Lindelof, Mourinho unsurprisingly made changes. In came the duo of Chris Smalling and Phil Jones. The English pair did not fair any better though. Jones was given a lesson in movement by Kane for Spurs’ opener, before having to come off with an injury.

Lindelof, his replacement, was abject, nearly setting up Dele Alli, and generally looking haphazard on the ball. Smalling largely played well, but was left one-on-one with Moura for the third, and was done by the Brazilian’s pace.

Ander Herrera dropped in as an auxiliary third centre-back, but ended up playing Christian Eriksen onside for Spurs’ second, showing his inexperience with the role. Mourinho has now run out of centre-backs, and may have also run out of ideas. Individual errors have cost United, and it is clear that their pool of centre-backs is not good enough.

Alderweireld may have been key

One centre-back that did have an excellent day was Toby Alderweireld. Alongside international teammate Jan Vertonghen, he repelled everything United had, particularly in the second half. Had a few things been different in the summer, he may have lined up on the red side tonight. Instead, he spent the night showing United what they were missing. He marshalled Lukaku expertly, and in the last year of his contract, will be receiving offers from many clubs once he is free to negotiate with them in January. Spurs would do well to hang on to him, as he appears to have mended his relationship with Pochettino.

In a game of two halves, sometimes it pays off to look at the two managers. Pochettino and Mourinho represent two different styles of management, positive and negative reinforcement, shoestring and big money.

Pochettino has a net spend of merely £50 million, whereas Mourinho’s is now over £300 million. Neither got the signings they wanted this summer, but Pochettino decided to talk up his own players, while Mourinho complained about lack of support from the boardroom. On the field, Pochettino’s side were well drilled, while Mourinho’s defence fell apart under pressure.

Spurs are now one of four teams to register three wins in the Premier League, whereas United are languishing in 13th. This victory will have felt good for Pochettino, who does not have a good record away to the rest of the big six. Spurs look like a settled team, while United have more soul searching to do.