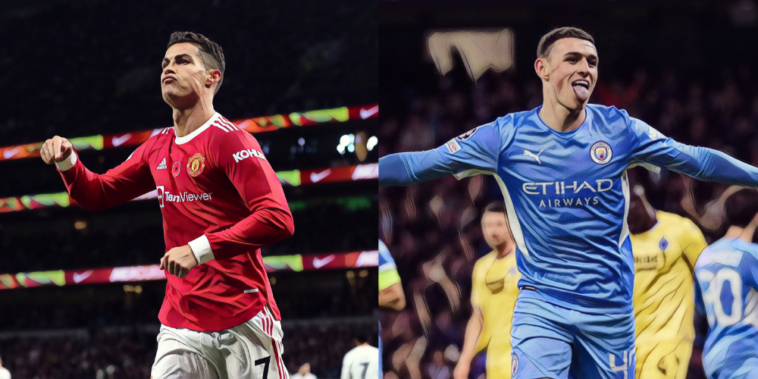 Manchester United face Manchester City this weekend as Mancunian rivalries are reignited at Old Trafford, the two teams meeting in one of the most eagerly anticipated fixtures on the Premier League calendar.

The Manchester derby has produced some unforgettable moments throughout its modern history, with the rivalry intensifying following City’s emergence as England’s dominant force across the past decade.

Ahead of the latest instalment on Saturday lunchtime, we’ve compiled our best Manchester derby combined XI.

Ederson has often been a spectator for City in recent months given the defensive strength of the Premier League champions, but the Brazilian remains one of the best in the business and a central part of Pep Guardiola’s side.

The 28-year-old’s distribution is elite and provides City with a unique option given the accuracy and range of Ederson’s kicking, whilst he has claimed consecutive Golden Glove awards in each of the past two campaigns.

City’s number one claims our goalkeeping position over David de Gea despite the latter’s return to form this season, a notable mistake against Atalanta in midweek aside.

Walker has been one of the Premier League’s leading right-backs for several seasons and has elevated his game to new levels across four seasons at the Etihad, adding finesse to the buccaneering best that saw him rise to prominence.

The 31-year-old remains first choice for club and country and his recovery speed allows City’s defensive line to push higher and squeeze the pitch, whilst he offers more offensively than Aaron Wan-Bissaka who remains a work in progress despite his defensive attributes.

Ruben Dias’ arrival at Manchester City proved the catalyst behind their reclaiming of the title from Liverpool, with the centre-back named as the FWA Footballer of the Year following an imperious debut season at the Etihad.

The Portugal international is commanding and vocal figure in the City backline, assuming a presence amongst the club’s leadership group and inheriting the captain’s armband on occasion.

Dias has helped transform City’s defence into the division’s best since his move from Benfica and there is no doubt envious glances at how he has settled from across the Manchester divide given United’s struggles for defensive solidity of late.

Raphael Varane is perhaps the sole Manchester United candidate to fill a centre-back role on current form, though the absence of the France international through injury – as well as Aymeric Laporte’s suspension – means John Stones partners Dias in our combined side.

Stones has lost his place to Laporte this season but remains a fine footballing defender, having returned from a spell out of favour last term to star during City’s run to the Premier League title.

The England international has largely eradicated the mistakes that plagued his game in past seasons and provides a fine compliment to Dias at centre-back, a combination of silk and steel that has proven successful for City.

Cancelo has quietly established himself amongst City’s most important players, whether stationed on the right or left of the back four the Portugal international proves influential at both ends of the pitch.

The 27-year-old leads the Premier League for interceptions and passes into the final third and ranks third for progressive passes, whilst his creative output has been demonstrated with two goals and three assists from just four Champions League appearances – after a hat-trick of assists against Club Brugge in midweek.

Phil Foden: "Joao (Cancelo) is one of the best, if not 𝘁𝗵𝗲 𝗯𝗲𝘀𝘁, attacking full-back in world football right now!" ✨🇵🇹 @ManCity pic.twitter.com/VAGcixLphn

Cancelo is amongst the finest attacking full-backs in world football at present and earns inclusion here at left-back, with Manchester United’s Luke Shaw having endured a disappointing start to the season after an excellent 2020/21 campaign.

Manchester United’s lack of a specialised defensive midfielder is well-documented, with the much-maligned ‘McFred’ midfield axis and ageing Nemanja Matic having often been cited for the Red Devils’ lack of cohesion and strength.

City, however, have seen Rodri continue to grow in importance after succeeding Fernandinho in the club’s anchor role, the Spain international’s ability to recover and retain possession having made him a vital part of the champion’s side.

Manchester City’s dominance of our combined side continues, with Kevin De Bruyne included as part of our midfield diamond.

The Belgian international has failed to reach previous heights so far this season, but has been the Premier League’s best player across the past two campaigns, winning successive PFA Player of the Year awards.

De Bruyne has reached 12+ assists in each of the past four seasons and remains arguably the Premier League’s finest creator, having entered the division’s all-time top 10 last season with an assist-per-game ratio that betters each of the names above him.

Bernardo Silva has enjoyed a remarkable turnaround at Manchester City this season, having expressed a desire to leave the Etihad before ultimately seeing a summer move fail to materialise.

The wealth of competition for places has seen Bernardo fail to replicate his elite 2018/19 performances across the past two seasons, but the current campaign has seen the Portuguese midfielder return back to his best.

"I don't need to describe him, everyone knows how hard he works."#MCFC's Bernardo Silva says he is looking forward to coming up against his international team-mate Cristiano Ronaldo for the first time in his career in the Manchester derby this weekend. pic.twitter.com/HZ7GWuRLRF

Bernardo has been named as City’s Player of the Month for both September and October, having produced a series of scintillating showings including outstanding performances against both Chelsea and Liverpool.

The 27-year-old runs his socks off and brings both industry and invention to City’s midfield, one that has become a stronger contingent with an on-song Bernardo amongst its ranks.

The first Manchester United name to make it into our combined XI, Bruno Fernandes has often shouldered the burden for the Red Devils since his arrival into the Premier League.

Fernandes has provided 52 goal involvements (30G/22A) in 61 league appearances for United since signing from Sporting Lisbon, whilst he leads the Premier League for chances created (162) and assists during that same period.

This season the Portugal international has taken on a more creative role behind summer signing Cristiano Ronaldo, topping the Premier League and Champions League for chances created so far this season.

Fernandes has also made more key passes than any player in England’s top division in 2021/22 and will be key to the Red Devils’ hopes of derby delight this weekend.

Phil Foden has found himself in a false nine position for Manchester City in recent weeks, with the midfielder having proven he can be devastatingly effective in almost any forward role.

Foden’s promise has been no secret with his development managed carefully under the watchful eye of Guardiola, who is now reaping the rewards as the 21-year-old continues to influence games at will.

That’s what we needed. Now let’s take this into the weekend 👊🏻💙 pic.twitter.com/tnnyVC8I1O

The England international is often in perpetual motion as he glides and feints beyond defenders, whilst an increasingly clinical touch in-and-around goal has only added to his reputation as a difference-maker in big games.

Foden’s goal in midweek saw him level Yaya Toure for Champions League goals for City (7), a remarkable feat for a footballer still in the infancy of his career.

Manchester City’s best chance of success this weekend is cutting the supply line to Cristiano Ronaldo, the forward having already shown his ability to bail out poor performances for Manchester United this season.

Ronaldo has scored nine goals in 11 appearances for the Red Devils this season, including a brilliant brace to rescue a point against Atalanta in the Champions League in midweek.

The 36-year-old remains as clinical as ever around goal and will be relishing the chance to go up against the Premier League’s benchmark this weekend, the chance to be a hero not one Ronaldo has often passed up during a remarkable career to date.