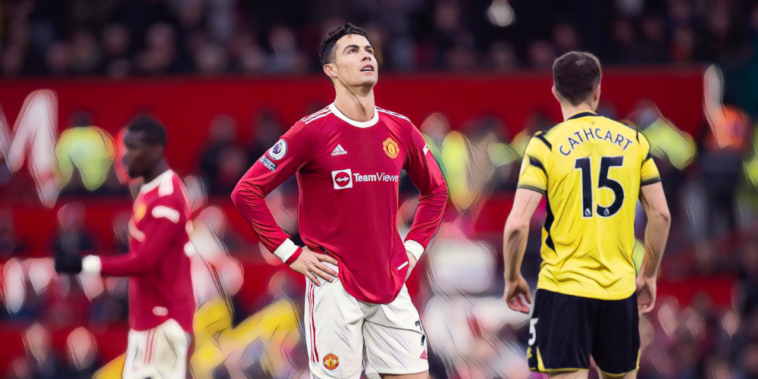 Manchester United have reportedly told Cristiano Ronaldo that he will not be leaving the club this summer following speculation regarding the forward’s future.

Reports in recent days have suggested that the Portuguese talisman has grown frustrated with the Old Trafford outfit, who, after their worst ever Premier League campaign last season, have so far overseen a slow transfer window.

To date, Paul Pogba, Edinson Cavani, Nemanja Matic, Juan Mata and Jesse Lingard have all left the club, while the club have yet to bring in any replacements ahead of what was expected to be a large rebuilding project under new manager, Erik ten Hag.

Reports in recent days have suggested that Ronaldo’s agent, Jorge Mendes, has been speaking about his client with other clubs, with the Portuguese agent having spoken to figures at Bayern Munich and new Chelsea owner, Todd Boelhy.

However, according to ESPN, Manchester United have told their iconic number 7 that ‘he is not available for transfer’, and that club sources have ‘insisted’ that they “want and expect” for him to remain at the club next season.

The report says Ronaldo is ‘keen to spend the remaining years of his career playing in the Champions League and has doubts about United’s ambitions after failing to make a signing so far this summer’.

While it was a wildly underwhelming season for the club, Ronaldo continued to show his goalscoring prowess last season, netting 24 goals in all competitions, including 18 in the Premier League to leave him third in the golden boot standings behind Mohamed Salah and Heung Min Son.

The 37-year-old has one year of the two-year deal that he signed last summer remaining.