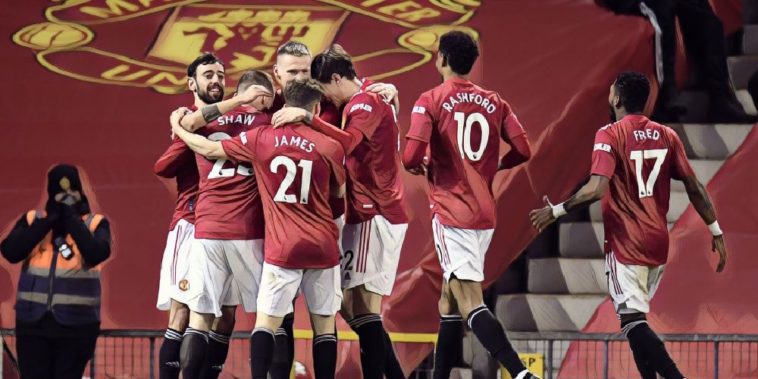 Liverpool legend Jamie Carragher reckons Manchester United aren’t actually that far away from the Premier League title, despite them looking set to finish a distant second to Pep Guardiola’s relentless Manchester City side.

After sneaking into a third-place finish on the final day of the previous campaign, the Red Devils have been much improved this season, the likelihood being that they will secure a place in the top two for only the second time since the retirement of Sir Alex Ferguson in 2013.

Ole Gunnar Solskjaer’s side are currently in second and four points ahead of Leicester City in third, albeit having played a game less than Foxes heading into a huge clash against Liverpool this weekend.

United have lost just four league games this season, all of which have come at Old Trafford, while they are also currently in the midst of a remarkable run away from home in the league, having remained unbeaten for 24 games on the road.

While that form has not been enough to see them really mount a title charge this season ahead of the clash with the Reds, former Liverpool defender Jamie Carragher has said that Solskjaer’s side ‘get too much criticism’ and that they aren’t that far away from posing a real threat next term.

Speaking on the Pitch to Post podcast, Carragher said: “How much of a leap would it be for Man Utd to win the title next season? It would be a jump, of course it would be.

“But I actually think Man Utd get too much criticism for what they’re doing right now. Man City are phenomenal – we’re talking about a team who were on the verge of doing the quadruple and could still do a treble.

“Man Utd are ten points behind but when you see the distance that some teams in second and third have been behind (the champions in the past), ten points doesn’t sound too bad to me.

“But I don’t think they’re as far away as people speak about, really. Some of the things they’ve done this season I don’t think some of the most famous teams in Man Utd’s history have achieved, in terms of going so long away from home without defeat.

“So there’s a lot to be enthusiastic about, and a lot will come down to whether they can make that last step in the transfer market in the summer. They’ve had a really good season, and they’ll want to cap it off with a trophy as Man Utd need to be winning trophies.”

United take on Liverpool on Sunday afternoon, with a win all but confirming their place in next season’s Champions League with four games to spare.