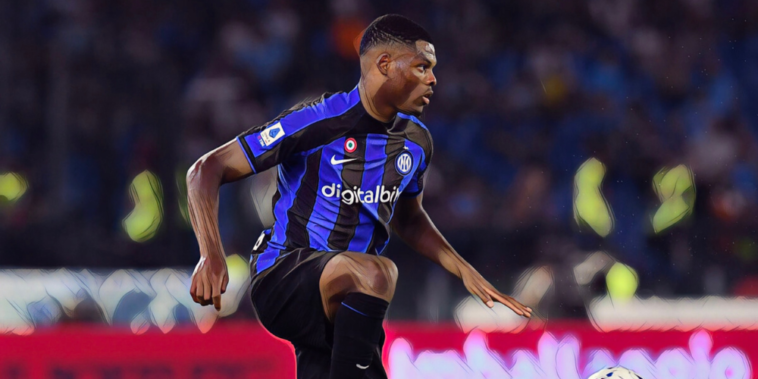 Denzel Dumfries admits he is flattered by reported transfer interest from Manchester United and Chelsea.

Dumfries has been linked with a potential move to the Premier League with both United and Chelsea understood to have tracked the Inter Milan right-back during the summer.

The Dutch international signed for Inter Milan from PSV Eindhoven after impressing at Euro 2020 and shone during his first season in Serie A in 2021/22.

Dumfries scored five goals and laid on a further four assists in just 21 league starts for the Nerazzurri and his attacking performances from wing-back have attracted interest from the Premier League.

United retain an interest in signing a right-back with Aaron Wan-Bissaka facing an uncertain future after falling out of favour this season, while Chelsea are in search for competition and cover for Reece James.

Dumfries has opened up on the rumours and insists his focus remains on success at Inter, but admits it is flattering to hear of transfer interest from the Premier League.

“The interest flatters me, of course, but my focus is only on Inter,” Dumfries told De Telegraaf while on international duty with the Netherlands.

“We want to win the Scudetto because we lost it last season. Even today, the feeling of having lost the last title burns strongly.”