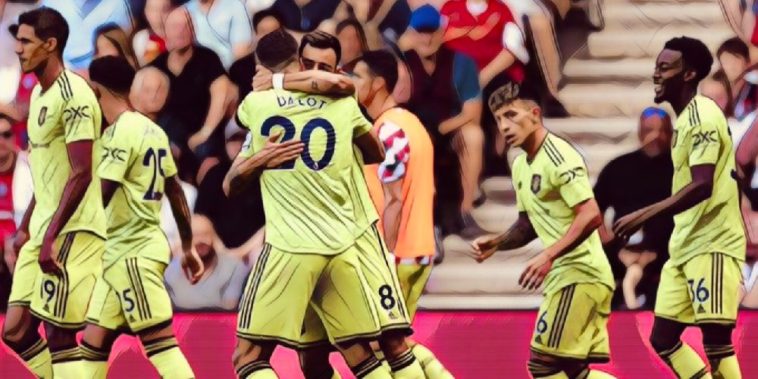 Manchester United followed up their impressive win over Liverpool with a hard-fought victory over an impressive Southampton side today at Saints Mary’s.

In a tightly contested game that was entertaining to watch but ultimately low on quality, a brilliant first-time finish from Bruno Fernandes after a slick team move from United would end up being the difference between the sides.

De Gea 7 – Questions remain over whether he is good enough on the ball to work under Ten Hag in the long term, but had a decent day out on the South Coast with an impressive stop from Joe Aribo in the second-half a high point.

Dalot 7.5 – Solid in defence and made a couple of excellent contributions in attack, the best of which was an assist for Fernandes’ match-winning strike.

Varane 8.5 (MOTM) – A world-class operator who marshalled a stingy defence all day, you suspect keeping him fit will be key to United’s hopes of success this season.

Martinez 8 – Was once again targeted with long balls, but came through unscathed and his tenacity and quality on the ball are clear to see.

Malacia 7 – Apart from a couple of hairy moments in the opening exchanges, the young Dutchman put in exactly the type of battling performance he produced against Liverpool in midweek. Neat and tidy on the ball and it will be interesting to see if he can level up his contribution in attack over the coming weeks and months.

McTominay 7 – The Scotland international may not be everyone’s cup of tea, although his work rate can never be questioned and put in a battling display in the defensive midfield position.

Eriksen 8 – Although the Dane faded a little in the second half, this was his best game so far in a United shirt. Some sublime switches of play off either foot.

Fernandes 8 – The game seemed to be passing United’s skipper by until he produced the game’s best moment of quality to volley home first-time from the edge of the area to seal the three points for his side.

In a league of his own. 🇵🇹👑 pic.twitter.com/LJCbEBLqPb

Sancho 6 – Some tidy footwork at times, but struggled to make much of an impact.

Elanga 6 – Coughs up possession way too much to be a regular at this level, although his directness did cause the Saints defence issues in the second-half and played a key role in the winning goal.

Rashford 5 – Sadly he failed to kick on from his impressive display against Liverpool on Monday. Started in the centre of United’s attack and clearly struggles when there are not huge amounts of space in behind to exploit and is asked to play with his back to goal.

Ronaldo – Gave United more of a focal point up top and won some crucial headers as United were pinned back by the Saints late on.

Casemiro – Didn’t do a lot of note, but his mere presence on the pitch eased the nerves of the United faithful as the Red Devils held on for a tight win.

Fred – Got stuck in after his side fell deeper and deeper during the closing stages.