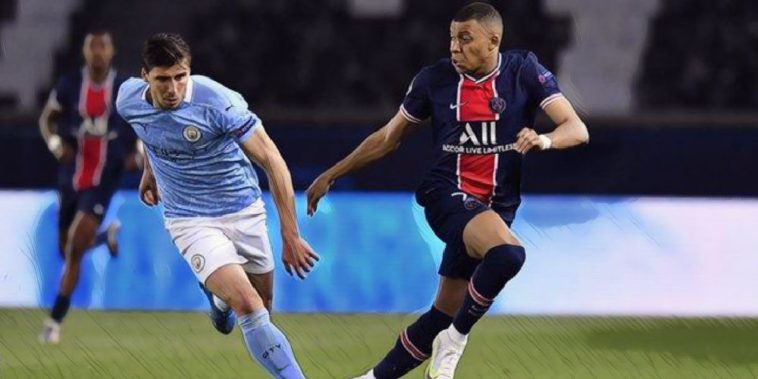 Manchester City take on Paris Saint-Germain this evening in the second leg of a gripping Champions League semi-final, the former protecting a narrow advantage ahead of their home fixture at the Etihad.

Goals from Kevin De Bruyne and Riyad Mahrez saw City come from behind to win at the Parc des Princes, but a side with the explosive firepower of PSG are far from out of the tie ahead of tonight’s second meeting.

With both squads stacked with talent, we’ve attempted to compile a dream side, here is The Football Faithful’s Man City and PSG combined XI.

Two top-class operators will line up in either goal during tonight’s clash, though we’ve opted for Ederson ahead of three-time Champions League winner Keylor Navas.

Navas has enjoyed a fine recent record in this competition and perhaps remains one of the most underrated shot-stoppers in Europe, starring during Real Madrid’s dominant run of success before making the move to Paris.

Ederson, however, remains a unique proposition amongst goalkeepers with his elite kicking fundamental to Pep Guardiola’s style and system – his strong shot-stopping mixed with unrivalled on-ball ability making the Brazilian one of the best in the business.

PSG’s full-back positions are perhaps the Parisian’s weakest positions, our combined XI featuring Manchester City players in both roles with Kyle Walker in at right-back.

The England international remains one of the Premier League‘s best right-backs with his electric pace a major weapon to City’s backline, the recovery speed of the 30-year-old allowing for a high line and helping nullify even the quickest of opposition wingers.

Walker’s raw athleticism is often viewed as the overriding facet of his game but he has improved immeasurably under Guardiola and his demands at the Etihad, becoming one of the most well-rounded full-backs in Europe.

PSG’s leader at the back and the man whose goal gives the French champions hope ahead of the return, Marquinhos will need to be at his impregnable best if Mauricio Pochettino’s side are to progress.

The Brazilian has been an integral figure for PSG in recent seasons and was handed the captaincy following Thiago Silva’s exit last summer, replacing his compatriot as the lynchpin of the Parisian’s defence.

The 26-year-old’s pace, anticipation and comfortability in possession have seen him feature in midfield on occasion, but his best role remains at the heart of the PSG backline.

Ruben Dias has been arguably the Premier League’s Player of the Season, his club-record arrival having proven money well spent following an outstanding debut campaign at the Etihad.

After struggling defensively last season, City have improved hugely with the Portugal international amongst their ranks, Dias’ determined defending seeing him hailed as the successor to Vincent Kompany as the club’s defensive leader.

Dias’ presence has also brought the best from defensive partner John Stones, a testament to his incredible impact since moving to English football.

Joao Cancelo’s difficult debut season in the Premier League has been followed by a breakout campaign at Manchester City, becoming one of the most effective full-backs in Europe as part of Pep Guardiola’s innovative system.

Cancelo has featured on both the right and left but has been more of a nominal full-back, moving into midfield and adding a new creative threat to the City attack.

The Portugal international’s dynamism and marauding runs infield have added a new dimension to the side’s forward play and his flexibility provides Guardiola with options for his renowned tactical tweaks.

Signed from Pescara as a teenager nine years ago, Marco Verratti ranks amongst PSG’s best signings of the modern era after developing into one of Europe’s best midfielders.

The Italian has made 345 appearances for the club and has won seven league titles, bringing an air of class and composure to the base of PSG’s midfield in his role as the side’s regista.

Comfortable in tight spaces and under pressure, Verratti’s probing passing range is often crucial to PSG’s breaking down of stubborn defences, an asset that could prove crucial ahead of a tense tie at the Etihad.

Ilkay Gundogan is enjoying the best season of his career this term, fulfilling the potential that saw him tipped to become one of Europe’s top midfielders whilst at Borussia Dortmund.

Having been an understated presence for much of his time with the club, the Germany international has exploded this term with a phenomenal goalscoring run during the festive period propelling Pep Guardiola’s side towards the title.

The 30-year-old has netted 16 goals in all competitions this season and has showcased his ability to compete with the very best, producing a classy performance as City fought back to win in Paris last week.

The Belgium international equalled the Premier League’s assist record for a single season last term and has entered the division’s all-time top 10, having amassed a huge 77 in just 179 league appearances for the club.

De Bruyne is a player who can execute passes other players haven’t even seen, the most complete midfielder in the game and amongst the most influential players in world football.

Edging out teammates Bernardo Silva and Raheem Sterling, alongside PSG’s Angel Di Maria, for a place in our side is Riyad Mahrez, the man whose goal separated the two sides in Paris.

Mahrez produced one of his best performances in a Manchester City shirt during the second half of the first leg, working tirelessly defensively and troubling the Parisians with that signature skill and guile.

At his best the Algerian leaves full-backs bamboozled and Pep Guardiola will hope for another unplayable showing from Mahrez in tonight’s second leg.

Neymar may divide opinion amongst the footballing public but there is no denying his outrageous talents, the Brazilian perhaps holding the key to PSG’s hopes of reaching a second successive final.

The 29-year-old ranks amongst the very finest players in world football and has compiled staggering statistics for both club and country, ranking second to only Pele for goals at international level and registering 41 goals and 26 assists in just 68 Champions League appearances.

Keeping the world’s most expensive footballer quiet will be essential to City’s hopes of success.

Keeping the aforementioned Neymar quiet is one thing, doing it in addition to stopping Kylian Mbappe is what makes PSG arguably the most dangerous forward proposition in Europe.

Mbappe burst onto the scene as a teenager and his upward trajectory has shown no signs of slowing, firing home an incredible 106 goals in 123 appearances since making the move to Paris on a permanent basis.

The 22-year-old’s blend of electric pace and ruthless finishing has seen him already become one of the most exciting talents on the planet, City next on the Frenchman’s hit-list after starring in eliminations of Barcelona and Bayern Munich to date.