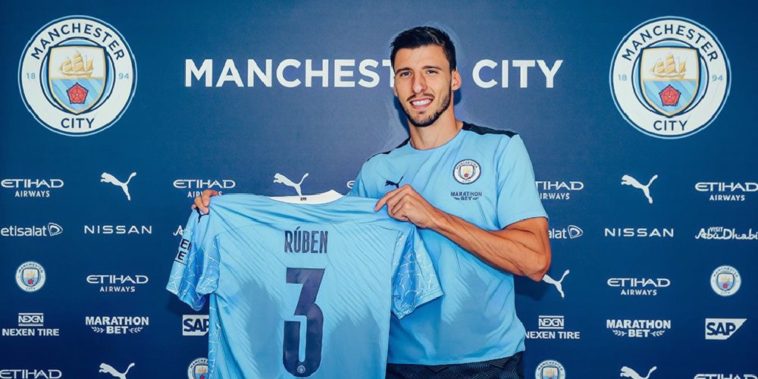 Manchester City director of football, Txiki Begiristain, has outlined the qualities Ruben Dias will bring to the club following the defender’s £62m move to the Etihad.

Dias completed the formalities over a club-record move to City on Tuesday evening as Pep Guardiola moves to strengthen his defensive options, the Portugal international arriving from Benfica with centre-back Nicolas Otamendi moving in the opposite direction in a separate deal.

The 23-year-old has previously attracted attention from a host of leading clubs after establishing himself as a key figure in the Portuguese capital, winning one league title with Benfica in addition to helping the national side to Nations League success last year.

His arrival marks the end of a prolonged pursuit of a new centre-back as City look to finally replace Vincent Kompany following their defensive struggles, and Begiristain is confident his side have landed a ‘real leader’ following the capture of Dias.

“Ruben is a player we have admired for some time and we have been impressed with how he has progressed at Benfica,” Begiristain told the club website.

“He has developed into a real leader and as a defender, he has all the attributes we are looking for. He is strong in the air, good in one v one situations and technically, he is very good, so we are confident he can thrive in our system.

“He is young, but has experience playing for a top European club in Benfica and we’re really pleased we’ve been able to sign him.

“He is another talented addition to the squad and someone who is only going to get better working under Pep.”

See also – Fantasy Premier League team of the week for GW3: ‘Penandes’ to the rescue