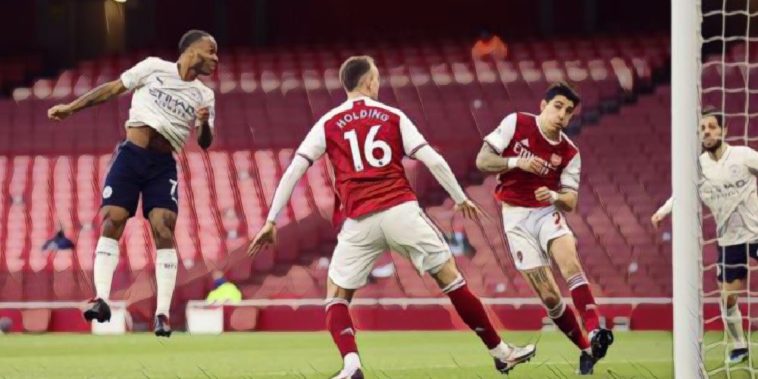 Here’s all you need to know about that ‘Big Six’ meeting at the Emirates:

Having lost to Leicester City in the Community Shield and slipped to defeat against Tottenham on the opening weekend, Manchester City finally got their season up and running with a comfortable victory against newly-promoted Norwich City on Saturday.

An early Tim Krul own goal set the hosts on their way, before Jack Grealish bundled in for his first City goal on his home debut, with second-half goals from Aymeric Laporte, Raheem Sterling and Riyad Mahrez adding further gloss to the scoreline.

Such a convincing win has reminded the rest of the division just why Pep Guardiola’s men romped to the title last season, as they hit the Canaries for five even without possessing a recognised centre-forward, with Gabriel Jesus putting in a superb display in a right-wing berth.

The club’s pursuit of a new number nine has taken a hit with top target Harry Kane announcing that he will be staying at Spurs this season, with City having seen a £100m rejected by the north London club with Daniel Levy unsurprisingly reluctant to part ways with their star asset.

There has been some perhaps fanciful suggestion that Cristiano Ronaldo could be willing to sever his ties with the red side of Manchester by moving to the Etihad, while the club faces the continued issue of trying to shift some of its fringe players such as Bernardo Silva and Laporte, albeit with both men impressing against Daniel Farke’s side.

As for this weekend’s encounter, Guardiola could be able to welcome back Kevin De Bruyne to the side after his absence last week, while John Stones is also in line for inclusion having yet to feature this season following his shortened pre-season due to Euro 2020 involvement.

Following their gruelling opening day defeat to Brentford, Arsenal continued their difficult start to the season with defeat to London rivals Chelsea at the weekend, first-half goals from Romelu Lukaku and Reece James proving the difference against Mikel Arteta’s depleted side.

In truth, one of the few positives from the bruising encounter was that the young Gunners did not simply cave-in in the second period, despite having been put to the sword by a vastly more experienced Blues outfit and their new arrival Lukaku.

Their task had been made harder, however, by a Covid crisis at the club, with summer signing Ben White the latest to have tested positive, with Pierre-Emerick Aubameyang and Alexandre Lacazette having also been stricken in recent weeks.

While £50m defender is set to be absent again against City, though Aubameyang and Lacazette should also be available having both featured and scored in the 6-0 Carabao Cup victory over West Brom.

The game will likely come too soon for the injured pair of Thomas Partey and Gabriel, although recent addition Martin Odegaard is in contention, the Norwegian having started on Wednesday night.

That second round tie – which also saw Aaron Ramsdale make his debut – saw a strong Gunners line up breeze past a much-changed and inexperienced Baggies side, with skipper Aubameyang notably netting a hat-trick.

Pep Guardiola got the better of his former assistant, Mikel Arteta, three times last season, the most recent being a narrow victory back in February.

After their 4-1 mauling at the hands of City in the Carabao Cup back in October, the Gunners were perhaps fearing the worst when they conceded inside just two minutes courtesy of a Raheem Sterling header.

Despite an early onslaught, however, the hosts stood firm to avoid a heavy defeat, with the Englishman’s opener proving to be the matchwinner, as he had been in the reverse fixture at the Etihad.

That triumph ensured that City would move ten points clear at the top and continue their run of 18 straight wins in all competitions, while the Gunners were left languishing in mid-table.

What channel is Man City v Arsenal on?

Those in the UK can watch the match on BT Sport 1.