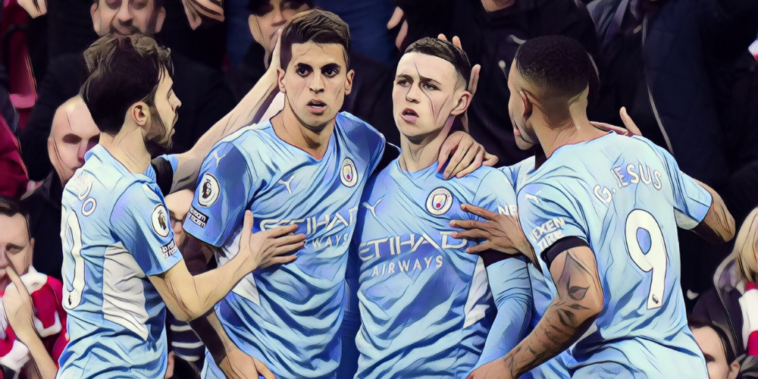 ‘The City sportswashing project has been 100% successful, their wealth so entrenched now, and so unquestioned, that I feel we should ignore them as much as possible and try to pretend they don’t exist. Everything will be far more enjoyable that way’.

That was journalist Johnny Nicholson writing for the Irish Examiner in an article headlined ‘If we pretend Man City don’t exist, this was a perfect title tussle’. The headline refers to Chelsea’s recent draw with Liverpool at Stamford Bridge, a result that put a double-digit gap between both sides and Pep Guardiola’s Blues.

‘Get out of our league. We don’t want your money. You’re not wanted here. Piss off. Start your own league in your desert’.

That was comedian and QI panellist Alan Davies foregoing any humour and coming over all Enoch Powell on an Arsenal fan podcast three days after Manchester City beat the Gunners in the capital, a defeat that largely came about from Granit Xhaka’s patented stupidity and Gabriel getting himself sent off.

Esteemed journalist Rory Smith meanwhile is concerned that it’s not ‘especially healthy for football’ if a couple of draws from teams close to the top-flight summit are enough to put them out of contention while another scribe Jack Lusby is responsible for a recent piece entitled ‘Is the Premier League in danger of a Bayern Munich-style dominance?’

From all this – not to mention a multitude of tweets, from journalists and supporters alike, all virtually wringing their hands and knotting their brows at the prospect of one team running away with it this season – it is possible to conclude a simple truth: that Manchester City must be enjoying another successful period again.

Yes, that is flippant but it impossible not to be reduced to such depths when a new negative angle accompanies every fruitful spell that City experiences. In the past, a string of good results has seen them accused of ‘ruining football’ and ‘buying the league’.

During the first flourishing of Pep Guardiola’s creation in East Manchester there was increased scrutiny and condemnation of the club’s owners with the highly questionable human rights record in UAE used as an entirely incongruous counter-balance to the magnificent football served up by Kevin De Bruyne and co. This explains Nicholson’s spurious and frankly immature use of the term ‘sportswashing’ in the opening paragraph.

Additionally, as City’s superiority began to take hold this term they were labelled ‘boring’ with their imperious squad size brought up on numerous occasions to explain away and diminish their victories.

It is very easy to debunk so many of these charges. Take the strength in depth assertion that falls apart the moment you compare City’s squad size to that of Liverpool’s or Chelsea’s. Not only is the reigning champion’s roster significantly smaller but they do not possess a recognised forward or a specialist left-back for goodness sake.

As for ‘buying the league’ the sale of Ferran Torres now means City have the second most expensively assembled squad of players in the top-flight. The accolade of having the most expensive belongs to Manchester United, who currently reside in seventh.

As a City supporter, I wait in vain for the day when the media eventually stumble onto the real reason for their astonishing success, that being Pep Guardiola’s genius and the club maintaining a clear and unified vision in their recruitment of personnel. Oh, and they play innovative and brilliant football, the likes of which is copied by most but mastered only by one.

Regardless, that rightful acclaim is not forthcoming and perhaps it never will be. Instead, the new stick to beat City with is the accusation that they are a ‘cheat code’, too good for the rest, meaning that the Premier League is becoming a monopoly and thus uncompetitive and thus losing its allure.

It is necessary therefore to also debunk this new manufactured tainting of an unpopular club’s rise.

It is a charge that is often chaperoned by the phrase ‘superclub’, an abhorrent, invented, and underhand creation of the faux-intellectual to imply that City are not only better than the rest, but they are also not like them. They have an advantage you see, one that is conveniently never stated largely because it doesn’t exist in a sport meticulously shackled by rules, regulations, and financial fair play. Still, it is an easy – and ultimately meaningless – phrase to throw around to further disparage the coaching achievements of Guardiola and the footballing achievements of his team. It is journalist-speak for ‘cheat code’, an insinuation that the playing field is no longer remotely level.

Which begs the question: was Arsenal a ‘superclub’ when they went an entire season undefeated in 2004? Was Manchester United a ‘superclub’ when they won eight titles in 11 years a couple of decades back? You will find these magnificent sides celebrated to the rafters to this day, just as they were celebrated to the rafters at their peak. The players involved are heralded as legends, securing prominent roles as pundits; legends from a perceived golden age of the Premier League.

For the record, City have won the league five times since their transformative takeover in 2008 and as for those who claim they are decimating competitiveness, three of those campaigns were the only times in the past decade when the title was decided on the final day. Do you want closely fought and thrilling title races? Then thank goodness for Manchester City because if we adhere to Johnny Nicholson’s suggestion and erase them from existence, this past decade will have almost exclusively seen Chelsea, Manchester United and Liverpool take it in turns to comfortably win the league by between eight to 12 points.

Ah but City have taken it to new heights, amassing an incredible number of points per season meaning their rivals have to be nigh-on perfect to even challenge them? This is not true, or at least not new. If we take City’s seasons under Guardiola out of the equation and concentrate on every other campaign in the 21st century we find 90+ points have been reached by the champions that year a full third of the time. Indeed, the average from 2000 to 2018 is 87.4 which certainly implies that the best teams each season have only stumbled once or twice along the way and that this heightened excellence is anything but a recent phenomenon.

Which brings us to an extension of this discovery: that sports evolve. In modern day darts there are significantly more 180s from the elite players than there used to be. The same is true of 147s in snooker. The same is true of athletics where world records are broken year on year. Should you have a problem with Manchester City or Liverpool amassing 90+ points a season – or indeed Chelsea doing so in 2006 or Manchester United in 2000, who incidentally won the league that season by a whopping and entirely ‘anti-competitive’ 18 points – don’t blame them. Blame the advancements made in the sport that largely benefit the best resourced clubs; blame the explosion of backroom specialists who are all employed to gain a club a marginal edge.

Whichever way you look at the ‘anti-competitive’ accusation thrown City’s way a much stronger counter-argument arises, but perhaps my personal favourite angle reveals the hypocrisy that resides right at its very heart. Because what these fans of legacy clubs – Liverpool, United and Arsenal predominantly – who happen to have a public platform fundamentally have a problem with is City’s domination depriving their own team of dominating. It’s not ‘anti-competitiveness’ therefore that bothers them – it’s that it’s no longer their team doing the monopolising.

Because nobody bleated a solitary protest when Liverpool were 25 points clear in 2019/20 and nobody wrung their hands and knotted their brows about the health of English football when United romped it at the turn of the century. Instead, on both occasions, an undeniable truth was acknowledged, no, celebrated.

That truth being that throughout the long history of the game there has typically been one team better than the others. And shock, horror, that team wins an awful lot of football matches.