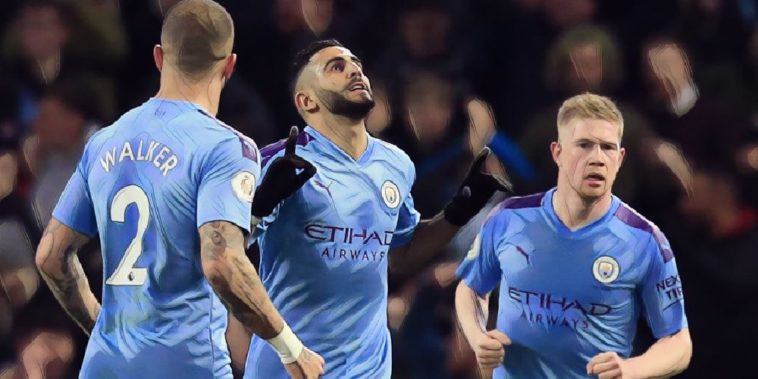 Riyad Mahrez has opened up on how he had to ‘adapt’ at Manchester City following his initial struggles after signing from Leicester in a club record deal.

The Algerian international had starred for the Foxes, helping the club to an improbable Premier League title triumph in 2016, before moving to the Etihad to join Pep Guardiola’s side two years later.

Mahrez initially struggled to replicate his previous form before establishing himself as a key part of the champion’s attack, and has opened up on the differences between playing at Leicester and for Guardiola’s all-conquering Man City side.

“At City, the team is built to win every game. We try to win everything we’re playing for,” said Mahrez said on The Football Show.

“Last year, when I arrived, the manager trusted me and believed in me, but I didn’t make the difference as quick as they thought I would. At a club like City, they don’t have time to wait.

“There are 20 top players and I was on the bench when others were performing, so it was a bit difficult for me to come back.

🌟 @Mahrez22’s touch is something else!

“But I played well towards the end of the season, and I started this season differently.

“When I’ve played, I’ve been performing so the confidence is here.”

With Claudio Ranieri’s Leicester side having taken full advantage of the counter-attack on the way to winning the title, Mahrez also spoke of his adjustment at having to play against more deep-lying defences.

“In my first year in the Premier League with Leicester, we were struggling a bit, but I always felt like I was playing good and that I could do something, ” he added.

“The next year, we started very strong and the team was so good. When I started scoring, the confidence went up.

“When I arrived at City, I noticed how everyone sits back so you have to think differently. You have to deal differently with your opponent and, in my case, the left-back, because he’s always in front of me.

“They also always have help around him, with a midfielder or the winger, so you have to change your play and your movement. You have to adapt to this. It took me a little bit of time but now I feel I’m set up very well.”