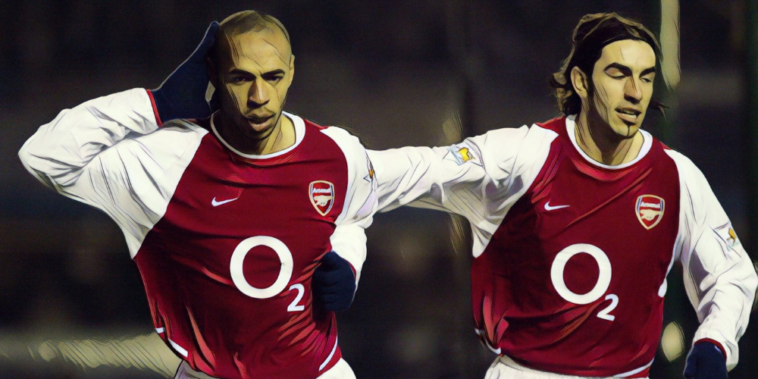 Lacazette’s milestone moment saw him become the eighth French player to reach 50 goals in the Premier League, joining a long list of illustrious names to have achieved the feat.

We’ve decided to look back at the leading Gallic goalscorers in the division’s history, here are the eight French players to score 50 Premier League goals.

The latest player to join this list, Lacazette’s brace against Sheffield United took the forward to 50 goals in the Premier League and secured Arsenal a much-needed win at Bramall Lane.

Lacazette signed for the Gunners for a then club record £46.5m from Lyon after a prolific spell in French football, scoring 20+ league goals in three consecutive campaigns before moving to the Emirates.

The France international has not quite replicated those feats in English football but has nonetheless provided Arsenal with a regular supply of goals, reaching double figures in the Premier League in each of his four campaigns with the north Londoners.

Lacazette’s double last weekend took him to 13 goals in 27 league appearances this season, one short of his best total in an Arsenal shirt as the forward underlines his importance to Mikel Arteta.

Signed as the most expensive teenager in history at Manchester United, big things were expected of Anthony Martial and he soon delivered with a stunning solo goal on debut against Liverpool.

Martial enjoyed an impressive debut season with the club, but his five years since have seen performances of huge quality mixed with disappointing and ineffective displays.

Debate continues to surround his best position with the Frenchman having often struggled to convince as an out-and-out number nine, despite a career-best season in 2019/20 that saw him named as the Red Devils’ Player of the Season after scoring 23 goals in all competitions.

Martial’s performances have dipped once again this season, however, and a strike rate of 55 goals in 167 appearances will need to be improved if he is to fulfil his early promise and become one of the division’s best.

One of the finest French footballers the Premier League has seen, Robert Pires dazzled as part of the best Arsenal sides of the modern era.

Pires formed part of a strong French contingent under the guidance of Arsene Wenger and flourished in partnership with Les Bleus’ teammate Thierry Henry, becoming a prototype for the inverted wingers seen commonplace in modern football.

Drifting inside from the left onto his stronger right foot, Pires was a regular goalscorer for the Gunners and was named as the FWA Footballer of the Year during the club’s double-winning season in 2001/02.

He later played an integral role in the club’s famed ‘Invincibles’ side two seasons later and added two FA Cups to his collection, scoring the winning goal in the first of those final successes against Southampton.

Quite possibly the most influential footballer of the Premier League era, Eric Cantona was the leading light of a Manchester United side who dominated the first decade of the rebranded division.

Cantona signed in a shock deal from rivals Leeds and soon established himself as the main man at Old Trafford, inspiring the Red Devils to a first league title in 26 years during his debut campaign.

Cantona was a maverick, both controversial and compelling, a player who shouldered responsibility for Manchester United and laid the foundations for the greatest period in the club’s history.

Louis Saha spent more than a decade in the Premier League and enjoyed successful spells at a succession of top-flight sides, spending a brief loan spell with Newcastle before rising to prominence at Fulham.

The forward’s goals propelled the Cottagers into the top tier and he continued to fire at an impressive rate, his performances attracting the attention of Manchester United who swooped to seal his signing in a £12.4m deal.

Four seasons brought two league titles and winners’ medals in the Champions League and League Cup, alongside 28 league goals before moves to Everton, Tottenham and Sunderland in his later career.

Saha scored an impressive 85 goals in the Premier League, the fourth-highest of any French player.

Ranking third is Olivier Giroud, a forward who has often felt somewhat under-appreciated during spells at London rivals Arsenal and Chelsea.

Giroud signed for Arsenal after inspiring Montpellier to a shock triumph in Ligue 1 and became an important part of Arsene Wenger’s plans, his touch, technique and physical threat making him the perfect focal point of the Gunners’ side.

He spent six seasons with the north London side and won the FA Cup on three occasions, scoring 73 goals in 180 appearances before a switch across the capital to Chelsea.

Opportunities have been less forthcoming at Stamford Bridge despite glimpses of what the veteran can still provide, a player with 80 goals in England’s top tier and second amongst the all-time leading scorers for the French national side.

One of two French players to have reached the Premier League’s fabled ‘100 club’, Nicolas Anelka proved a fine asset to several English sides during a nomadic career at the highest level.

Signed as a relative unknown by Arsenal as a teenager, Anelka exploded in the Premier League to become the most exciting young talent in the division, forming part of the side that won a domestic double in 1997/98 before winning the PFA Young Player of the Season the following campaign.

He moved on to an unsuccessful spell at Real Madrid before returning to the Premier League via Paris Saint-Germain, signing on loan for Liverpool before a permanent move to Manchester City.

The goals flowed freely with 37 in 89 league appearances for Kevin Keegan’s outfit, before later spells at Bolton, Chelsea and West Brom.

Anelka’s period at Chelsea was perhaps the most consistent of his career as he won a second domestic double at Stamford Bridge, whilst he also became just the second French winner of the Premier League’s Golden Boot in 2008/09.

The finest French footballer in Premier League history and for many the greatest talent the division has seen, Thierry Henry proved an unstoppable force for much of a glorious eight-year career at Arsenal.

Henry netted 175 league goals to become the Gunners’ all-time record goalscorer, his tally the second-highest of any overseas player with only Sergio Aguero having netted more.

Henry won a record four Premier League Golden Boots during his time in English football, whilst he was twice named as the PFA Player of the Year and as the FWA Footballer of the Year on three occasions.

There have been few more intimidating sights for the division’s defences than Henry in full flow, a footballer who set the standard for modern forwards with his ability to both score and create.

Henry’s combination of speed, skill and clinical touch saw him reign as the Premier League’s best, the inspirational figurehead behind an Arsenal side that won two league titles and two FA Cups during the early 2000s.