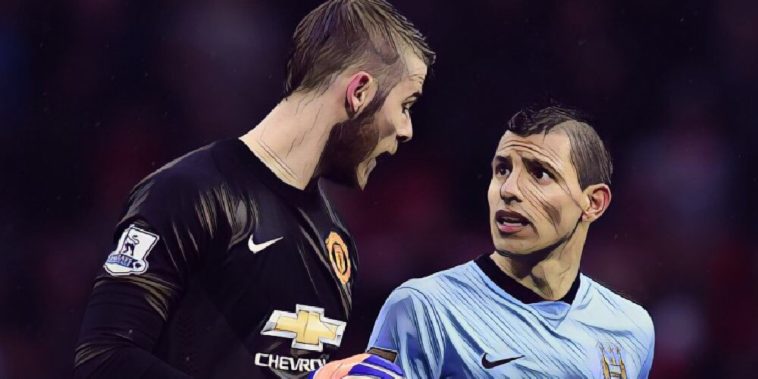 Much has been made of the ever-building rivalry in Manchester over the last decade or so, but Manchester City goal machine Sergio Aguero has revealed that one of his closest friends is Man Utd ‘keeper David de Gea.

Naturally, the rivalry between fans on the red and blue side of Manchester has intensified in recent years, with an apparent decline at Manchester United coinciding with the most successful period in Manchester City‘s history.

However, that rivalry seemingly doesn’t extend too far among the players, with all-time leading Manchester City goalscorer Sergio Aguero revealing that his former teammate at Atletico Madrid, David de Gea, is one of his closest friends, in what is quite a lonely experience for the Argentine in England.

His son, Benjamin, currently goes to school back in Aguero’s homeland with his mother and speaking to at the launch of Amazon prime’s documentary on the Premier League champions, the striker has revealed that he doesn’t have many friends:

“Benjamin lives with his mother in Argentina. He goes to school there.

“He spends a week here every month. He has a room here and when my siblings come, they stay here too.

“But most of the time I’m on my own. If not, I’ll hang out with Nico Otamendi — or David De Gea.

“I hang out a lot with De Gea because we played together at Atletico Madrid. We have a good friendship.

“But he plays at United and I play at City.”

CLICK HERE FOR FIVE OF THE BEST SERGIO AGUERO GOALS