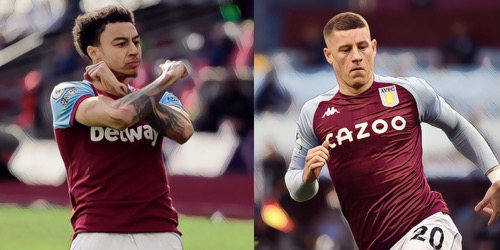 The economic obstacles coughed up by the pandemic have forced Premier League clubs to conduct their transfer dealings in a more calculated fashion. Despite a summer of lavish spending by some, for most frugality is now the name of the game.

The contemporary loan market is a one-stop shop for all your squad needs. It is no longer a resource solely for the small fry, the big ‘uns are getting their feet wet too. A loan transfer, in theory, offers a low-risk proposition for clubs. In practice, for players nearing their peak years, a loan move can be equally damaging or beneficial to their careers.

Players in the 27-29 age bracket contemplating a loan move are often at a crossroads in their career – a limbo of sorts. The next transfer is likely to be their last. They are too mature for the ‘prospect’ tag, but not sufficiently experienced to be considered a seasoned campaigner. At 28 and 27 years-old respectively, Jesse Lingard and Ross Barkley fit that criteria.

Neither have had the prestigious career expected of them. The two have grappled with inconsistency over the years, never truly convincing management of their worth over a sustained period. Though both players faced the prospect of limited game time again this season, their fortunes on the road could not have differed more.

Lingard’s renaissance at West Ham is the feel-good story of this outlandish season. A polarizing figure at Man United, he was unused at Old Trafford in the first half of the campaign. His application was scrutinised in the media, but his gifts were never in any doubt. Lingard just needed the right atmosphere to harness it.

Following the departure of £45m flop Sébastien Haller in January, West Ham were in the market for a new attacker. Lingard was the ideal candidate. The England international, who had worked briefly with David Moyes during his infamous season at United, took no time to settle in London.

Two goals on his debut against Aston Villa sowed the seeds of a purple patch that has seen him manage eight goals and four assists in his nine Premier League outings for The Hammers. Unsurprisingly, Lingard has the highest goals per 90mins (0.98) in the Premier League this season.

🗣 "He's turned up at West Ham having not played much football for Manchester United, he's kept himself in good shape, sign of a good pro."

Gareth Southgate was revealed to be a key driver behind Lingard’s move. Lingard attributed the decision to persuasive conversations he had with both the England boss and Moyes. There was little shock then when Lingard’s sparkling club form earned him a long-awaited international recall. After a two-year hiatus, the attacking midfielder played a part in all three England matches last month, bringing his international cap tally to 27.

What is next for Lingardinho then? Though Ole Gunnar Solskjaer recently claimed he’d gladly “welcome back” Lingard, it’s hard to envisage his long-term future being at Old Trafford – regardless of how well regarded he is at his boyhood club.

8 – Despite only playing in his ninth Premier League game this season, Jesse Lingard (8) has now equalled his best scoring return in a top-flight campaign – also netting eight times in 2017-18 for Man Utd (33 apps). Lingz. pic.twitter.com/lTMDfMoyed

Can you win Player of the Season if you only started playing January?

Asking for a friend… pic.twitter.com/osLi0FhSvp

United fans appear happy to see Lingard performing well, regardless of where his future lies. They seem to harbour sincere support for the home-grown talent. Gary Neville recently questioned why Lingard should even contemplate a return, saying, “Daniel James has come in for the last few weeks and he’s out of the team again. Does he [Lingard] want to be that type of player who’s a bit in and out?”

🗣"I don't see him going back to Manchester United."

Paul Merson believes Jesse Lingard's future is not at Manchester United after impressing at West Ham on loan pic.twitter.com/se9Wh1pAo2

Whether United decide to reintegrate the midfielder into their squad, or cash-in on ‘Lingard fever’, it is a dream scenario for The Reds no matter how you cut it. In either case, we expect Lingard’s fate to be decided this summer, and no later. With his contract expiring in 2022, and his value peaked, there is no better time to offload him. He has already attracted interest from the likes of Inter Milan, Arsenal and Leicester. Who wouldn’t want him on current form?

West Ham do not have an option to buy, but have claimed they will do everything in their power to secure the player on a permanent basis. It does seem though that the Hammers could face a battle to retain his services as clubs line up to compete for his signature.

Lingard has, however, been mooted as a potential make-weight in a deal for West Ham’s Declan Rice, with Moyes valuing his midfielder at “far more” than £100m. Any ‘player plus’ deal would certainly involve a hefty cash sum.

You 𝒏𝒆𝒆𝒅 to watch this.

Jesse Lingard runs from inside his own half to score a stunning opener for West Ham!

Solo goal of the season?

United had previously welcomed offers of around £15m for Lingard, but are now thought to be seeking closer to £30m. If Lingard’s stock continues to rise there’s no telling how high that figure may go. On current form, that inflated fee still feels like a bargain, regardless of the market conditions.

If Lingard’s red-hot performances have created, as Gary Neville put it, a ‘win-win’ scenario for United, then Ross Barkley’s listless stint at Aston Villa is undoubtedly a resounding ‘lose-lose’ situation for the Chelsea loanee.

Barkley, like Lingard, had fallen out of favour at Stamford Bridge after enduring an injury plagued 2019/20 campaign. There was little surprise when Frank Lampard deemed him, a player who had started just 13 Premier League games, surplus to his requirements. Barkley’s ailments, and erratic form aside, it was the arrival of German wunderkind Kai Havertz that ultimately proved to be the catalyst for the Englishman’s season-long exile.

2 – Ross Barkley has scored in each of his two Premier League appearances for Aston Villa (2 goals), as many as he managed in his last 42 for Chelsea before moving to Villa Park. Quality. pic.twitter.com/Cbz8FHfH8m

Barkley’s immediate impact at Villa was impressive if somewhat unexpected. Two goals (one in the 7-2 demolition of Liverpool) and an assist in five appearances – few would have predicted such an auspicious start. His stellar performances over the following weeks were instrumental in propelling a buoyant Villa side to the dizzying heights of sixth place. Then there was his blossoming partnership with Jack Grealish – that combination had English fans salivating.

Villa boss Dean Smith had lured Barkley to the Birmingham outfit with the promise of a stage, a platform from which he could showcase his international pedigree. Now all eyes, including Gareth Southgate’s, were firmly on Barkley. The media debated his inclusion in the Euros squad and where he ranked among England’s abounding creative talents. When it seemed everything was falling into place for him, disaster struck.

A hamstring injury picked up against Brighton in November sidelined the Liverpool native for three months. While Barkley lay on the treatment table, Villa dipped into the transfer market, signing Morgan Sanson from Marseille.

Barkley, who now had added competition, returned to action a shadow of his early-season self, scoring just once and registering one assist in 13 games. He has been benched on a number of occasions recently, even suffering the indignity of losing his starting place to 19-year-old academy product Jacob Ramsey.

It was unrealistically hoped that Barkley could fill the creative void left by injury-struck Jack Grealish. Nonetheless, Barkley’s floundering attempts to fill his captain’s boots have fallen well-short. A real low-point came in February. With his side trailing 2-1 to Leicester and searching for an equaliser, Barkley, Villa’s creative spark in the absence of their talisman, was substituted with 15 minutes to go.

We almost resoundingly supported the guy, from day 1. We supported him after his injury. We then supported him through the 'he needs to get his fitness back 2 month phase'. Now quite frankly, he is just taking the piss, and literally doesn't even bother breaking into a sprint

His inconsistency and perceived lack of effort over the past three months has put an unequivocal end to any notions of Euro 2021. However, the greater worry is what effect this underwhelming loan spell may have on the rest of Barkley’s career. It may be a hammer blow to his confidence.

If he can’t shine in a mid-table team, then at which level does he really belong? As a youth he was hailed on Merseyside as a ‘once in a generation talent’. I fear he may end up just another enigma of the sport. A player whose career flatters to deceive.

Aston Villa fans have made it abundantly clear that he is not wanted at the club beyond the end of the season. There is no formal option to buy Barkley, but with a previously quoted fee of £35m, they’re unlikely to make the deal permanent. It’s equally improbable that we’ll see him play a role at Stamford Bridge next season. Chelsea have a frightening depth of attacking talent. Havertz, Pulisic, Ziyech, Mount – there is little chance of dislodging any of these guys.

Barkley’s other options appear to be extremely limited. His standing within the community has been so eroded this season, it’s inconceivable that any top 10 team would take a punt on him on a permanent basis. Another loan seems more likely. Despite Barkley’s poor form, and to the incredulity of Hammers fans, reports of Moyes’ interest in the midfielder have persisted. We can only assume any deal would be on a temporary basis.

The plights of Lingard and Barkley highlight the bigger picture – the importance of the loan market in the current economic climate. There were 27 senior loanees on the books at Premier League clubs during the 2018/19 season. That number increased to 32 last term, and again to 35 this campaign. Not a huge leap admittedly but, given the reduced financial clout of most clubs, it does suggest some meaningful growth.

It is very possible that top-flight clubs will look towards the loan market more than ever this summer, in light of restricted transfer budgets. While most sides will view loan moves as relatively low risk, the fortunes of Lingard and Barkley show that from a player’s perspective such deals have the power to either ignite or seriously damage a footballer’s career.