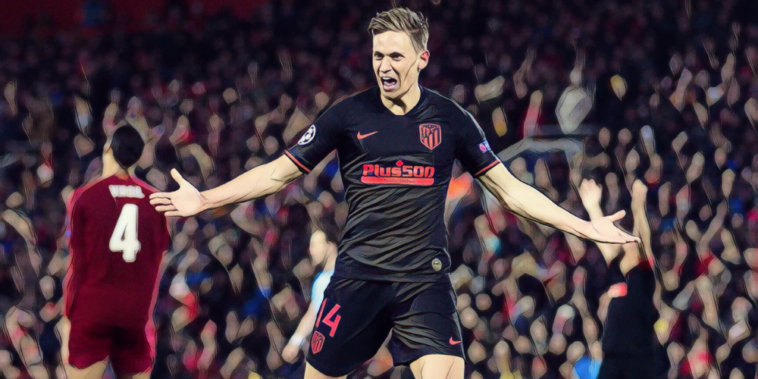 Liverpool travel to face Atletico Madrid in the Champions League’s group stages this evening, with the Reds facing a difficult challenge against the Spanish champions.

Tonight’s meeting at the Wanda Metropolitano will be seventh time the clubs have met in continental competition and Jurgen Klopp will be hoping his side can improve on an indifferent record against Atletico and move closer to the Champions League’s knockout stages.

Ahead of the clash, we look at Liverpool’s record against Atletico Madrid.

The first meeting between the sides came during the 2008/09 Champions League group stages, with Liverpool forced to settle for a draw in the Spanish capital following Simao Sabrosa’s late equaliser.

Robbie Keane had earlier handed Rafael Benitez’s side the lead inside the opening 14 minutes, the Republic of Ireland international opening the scoring before both sides had efforts disallowed for offside.

Liverpool had dominated the opening exchanges but were punished for their wastefulness late on, Simao powering home an equaliser with seven minutes remaining to rescue a point for Atletico.

The return encounter also ended in a 1-1 draw, though this time it was Liverpool who left it late to salvage a point at Anfield.

Maxi Rodriguez – who signed for Liverpool on a free transfer from Atleti two seasons later – looked to have earned the Spanish side a vital victory after opening the scoring on Merseyside, only for Steven Gerrard’s 95th-minute penalty to rescue a draw for the Reds.

Liverpool had earlier seen two penalty appeals turned down before a third was given following a foul on Gerrard, the felled captain stepping up to confidently send the goalkeeper the wrong way and level in stoppage time.

Both sides completed the Champions League group stages unbeaten to progress to the knockout rounds, with Atletico eliminated in the last 16 after losing to Porto on away goals.

Liverpool’s run was ended by compatriots Chelsea in the last eight, a thrilling all-Premier League quarter-final clash including an incredible 4-4 second-leg draw at Stamford Bridge.

Atletico and Liverpool renewed rivalries the following season, this time meeting in the semi-finals of the Europa League.

It was the Spanish side who claimed a slender first-leg advantage in Madrid, Diego Forlan scoring the game’s only goal at the second attempt after making poor contact with his initial header.

Liverpool – in the absence of the injured Fernando Torres – failed to create clear-cut opportunities for much of the contest, though did see a Yossi Benayoun effort wrongly ruled out for offside.

Atletico had the better of the opportunities, however, and were perhaps unfortunate to only take a one-goal advantage to Merseyside for the semi-final return.

Liverpool exited the Europa League semi-finals despite victory in the return leg, Forlan once again the hero for Atletico after the Uruguayan’s extra-time goal sealed progress for the Spaniards in extra time.

Alberto Aquilani’s goal had levelled the tie for Liverpool to force the additional period, the Italian midfielder converting from Yossi Benayoun’s cross to restore aggregate parity.

Benayoun then put Rafael Benitez’s side ahead in extra time and seemingly on course to reach the final with a low driven effort, only for Forlan to break Red hearts after arriving unmarked to turn home Jose Antonio Reyes’ cross and send Atletico through.

Atletico advanced to the final and met Fulham in Hamburg, securing the trophy after Forlan’s double sealed an extra-time victory against the west Londoners.

Jurgen Klopp will be well aware of the threat posed by Atletico this evening, having seen his Liverpool side frustrated by the Spaniards during a 2019/20 Champions League last-16 meeting.

Liverpool were the reigning European champions and cantering towards a first Premier League title in three decades, but came unstuck against Atletico once again as Saul Niguez’s fourth-minute goal handed Diego Siemone’s side the advantage.

The travelling Merseysiders struggled against Atletico’s aggression and energy, failing to register a single shot on target as the capital club secured a hard-fought first leg victory.

The holders were eliminated from the competition following a pulsating and dramatic second-leg encounter, one that included four extra-time goals and wild celebrations from Diego Simeone and his side.

Roberto Firmino doubled Liverpool’s advantage on the night and put the Reds ahead on aggregate in the added period, but the tie swung following a catastrophic blunder from deputy goalkeeper Adrian.

The Spaniard’s mis-hit clearance fell to the feet of Marcos Llorente, whose low finish moved Atletico ahead on away goals.

That moment swung the momentum and Llorente added a second to all but assure Atletico’s progress, before Alvaro Morata netted a third on the counter as Liverpool crumbled at Anfield.

Jan Oblak’s sensational showing in goal for Atletico – making nine saves – had been decisive for the Spanish side, the difference between the teams arguably the performances of their respective goalkeepers.