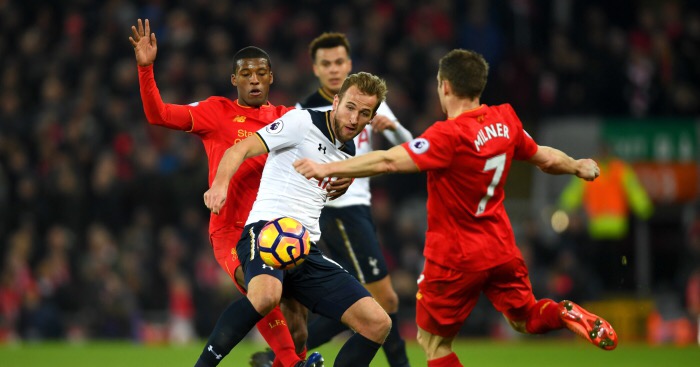 Liverpool got back to winning ways after this win against in form Spurs, with a Mane brace securing a 2-0 win for the home side.

Tottenham arrived at Anfield in tremendous form and sit second in the table having lost just twice since the season began. Liverpool on the other hand have had a horrendous start to 2017, and had only managed one victory in the last ten games prior to this encounter.

But a Sadio Mane brace sealed the points for the out of form club, and seriously dented Tottenhams fading title hopes.

Mignolet kept his place in goal despite all the speculation on social media that he would be replaced by Loris Karius. Dejan Lovren failed a late a fitness test which meant Lucas started at centre back again, but other than that Liverpool fielded a more or less full strength team. Tottenham were without key defenders Danny Rose and Jan Vertonghen, and how costly this would prove.

Liverpool took the initiative early on and pressed Tottenham from the start where they forced three corners in quick succession. Tottenham were on the back foot, but the defence was not troubled too much despite Livepool`s pressure.

Liverpool had a quick break on 12 minutes. Roberto Firmino and Philippe Coutinho both saw their efforts well blocked. However just four minutes later Liverpool`s dominance paid off. Sadio Mane raced clear after Coutinho had won the ball back on the half way line. A clever pass from Wijnaldum sent Mane clear, who finished nicely with a lob over the advancing Lloris to score the opener for the reds.

Two minutes later Liverpool doubled their lead and again Mane was the scorer. Mane robbed the ball off Eric Dier who then raced towards the Spurs goal. A squared pass to Lallana produced a good save from Lloris who then also saved the rebound from Firmino. But the ball then fell at the feet of Sadio Mane, who duels obliged by rifling home into the roof of the net. 2-0 Liverpool.

Spurs were a bit shell shocked and Mane was running riot and had further chances to increase Liverpool`s lead before half time, but saw his effort well saved by Lloris whilst another shot went just wide.

Tottenham had one notable effort on 25 minutes when Son was free in the box but his shot was well saved by Mignolet.

Liverpool led 2-0 at half time and in the second half they couldn’t produce the same fluency and effort and the game petered out into a bit of a cat and mouse affair and got a bit niggly with silly fouls resulting in a number of bookings for both sides which resulted in the game not meeting the same standard as the first half.

Tottenham did have the ball in the Liverpool net on 56 minutes but was correctly disallowed. Had the goal stood, it would have changed this game, perhaps for the better.

The final score was 2-0 Liverpool but this result sort of flattered the visitors, which was a surprise bearing in mind Tottenham`s record so far this season. Tottenham remain in second spot with Liverpool just one point behind.

A fight for second place

This result opened up the fight for second spot. Two points separate Tottenham in second spot and Manchester United in sixth, with Arsenal, Liverpool and Manchester City all in the hunt for the Top 4. The coming weeks should be interesting. Liverpool`s win against a top 6 Team again showed the form of earlier in the season and shows how good they are, but they just need to play top 6 teams every week.

Liverpool have a two week break now so will have a well deserved rest, whereas Tottenham are in Europa league action this week followed by a difficult FA cup tie at Craven Cottage v Fulham next Sunday.