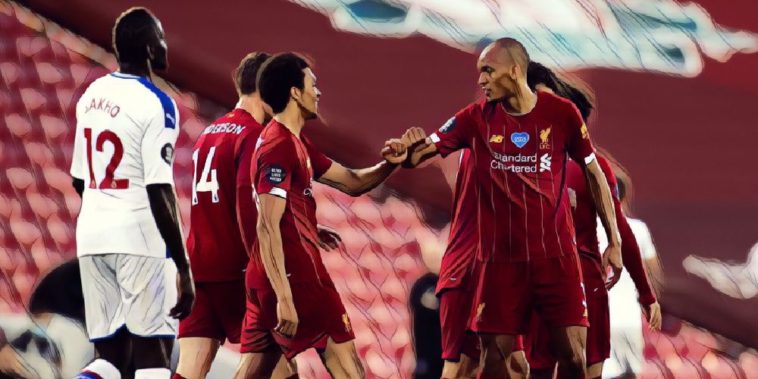 Liverpool moved ever closer to a first league title in three decades after a comfortable evening at Anfield, goals from Alexander-Arnold, Mohamed Salah, Fabinho and Sadio Move moving the league leaders 23 points clear at the top of the Premier League.

Jurgen Klopp’s side could be crowned champions as early as Thursday should second-placed Manchester City fail to win at Chelsea, and Alexander-Arnold says he was pleased with the Reds’ ability to bounce back from a disappointing draw at Everton last weekend.

“The lads have done really well,” he told Sky Sports. “It was a difficult game and we were disappointed to only get the draw at Everton, but for the first game back at Anfield after what’s gone on, it couldn’t have gone any better.”

The England international opened the scoring with a superb set-piece effort, curling the ball beyond the Palace wall and past the despairing dive of Wayne Hennessey for his third league goal of the campaign.

Alexander-Arnold admits he has been practising his free-kick technique regularly as he bids to score more from such situations, having seen several opportunities wasted during Sunday’s goalless Merseyside derby.

“I have been practising a lot and I had a few against Everton which I was disappointed not to score with, but it’s always good to get the ball rolling for the boys.”

The 21-year-old’s effort saw comparisons drawn with David Beckham, the former Manchester United midfielder having scored more free-kicks than any player in the history of the Premier League.

Alexander-Arnold was flattered to receive such lofty praise, but says his sole focus is on securing the club’s long-awaited title success as Jurgen Klopp’s side moved to the brink of being crowned champions.

“The comparisons with the best free-kick taker in Premier League history are very nice but there is a lot of work to do. It is quite close [the title] but we know a lot can happen in the Premier League. We have worked hard for this and this is what we have always dreamed of.

“We are in a good position so hopefully we can get over the line soon. We have to focus on ourselves, we are not hoping Man City drop points, we know it’s our hands. We still have to go to City next week and get a result.”

Liverpool return to action with a potentially decisive clash against second-placed Manchester City next Thursday, the clash scheduled to take place at the Etihad but under review at present amid safety concerns.