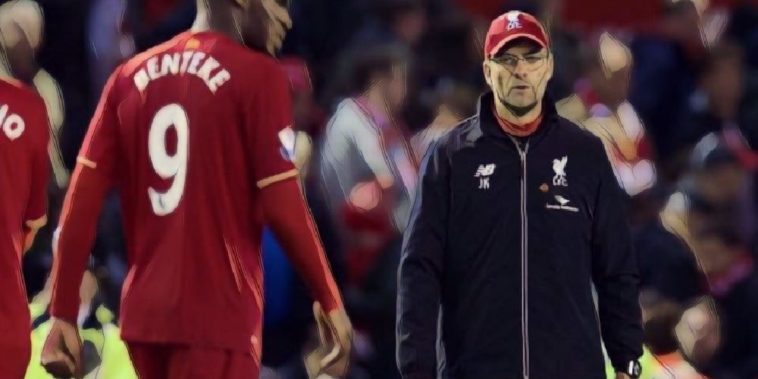 Jurgen Klopp admits he ‘felt alone’ after reflecting on his early defeats to Crystal Palace during his time at Liverpool, as the club close in on the Premier League title ahead of tonight’s meeting between the two sides.

Klopp’s first defeat as Liverpool manager came against the Eagles in November 2015, Scott Dann’s goal eight minutes from time securing a shock victory for the visitors and prompting many inside Anfield to leave the ground early.

The German was critical of his side’s support following the clash and admits he felt ‘alone’ following the stadium’s exodus, admitting it was ‘important’ he demanded change from the Reds’ fanbase as he sought to bring long-awaited success to Merseyside.

“On that day I felt literally alone because so many people left the stadium and I thought it was important that night to make a statement that things had to change,” Klopp said, as per the Guardian.

“We had to change and supporters could change as well if they wanted to help. I’ve never felt alone again since then, honestly, and I will not feel alone when something special will happen whenever it will happen.”

Liverpool’s last defeat at home also came against Palace in April 2017, the club unbeaten in 55 league fixtures at Anfield since that loss, though only a handful of players remain at the club from that side.

Klopp insists that defeat was not the catalyst for wholesale changes within his squad, though believes his side have come a long way since as they edge ever closer to a first league title in three decades.

“We didn’t have a massive masterplan behind it and think: ‘We have to sell him, him and him and bring in him, him and him.’ Not that night, for sure. It was a cold night against Palace, I remember that, but I don’t know too much about that time any more.

“The only thing I know is that the team we had at the time was the basis for what we have now. They created the mood that we could build on, even if the mood was not that good in the moment. We had to use the fact that people wanted to change things. If people don’t want to change and think everything is fine because a new manager is coming then nobody is bothered.

“The situation was our starting point and losing to Crystal Palace that night maybe helped more because I could make this kind of statement after the game. It was not planned, it was just what I felt in this moment, and it helped us to come together closer because people discussed the influence of supporters in the stadium that night. They had to think about it and thought: ‘OK, we are not just there for the start and for 80 minutes of the game, the team needs us for 95 or 100 minutes or however long it will go.’ That was important.

“A lot of things have changed. I couldn’t tell you how many players, but the team at that time was not so bad and the team now is a pretty good one. A lot of things we did in the past obviously worked out and may that continue forever! That would be really cool.”