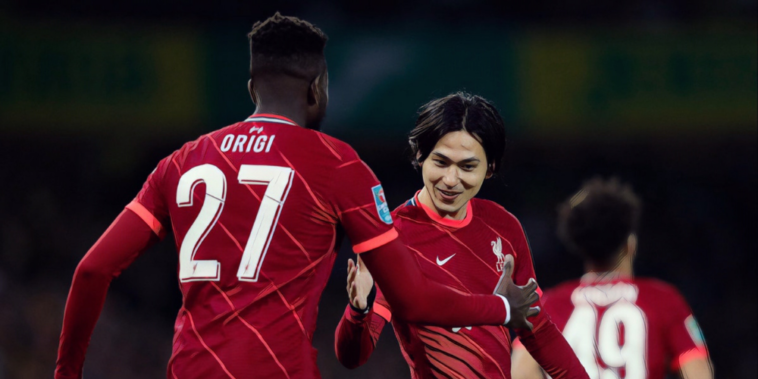 Liverpool will consider offers for Divock Origi and Takumi Minamino in the coming days as the club look to conclude a deal for Luis Diaz before the transfer deadline.

Liverpool are hoping to finalise a deal for Diaz, having agreed to pay Porto around €45 million with a further €15 million to potentially follow in performance-related add-ons.

It is being widely reported that the Colombia international is set to undergo a medical and sign a long-term contract with the Reds, who brought ahead a planned summer move following interest in the 25-year-old from Tottenham.

Diaz’s arrival will push both Origi and Minamino further down the pecking order, and according to The Athletic, Liverpool will now listen to offers for the duo before the deadline.

Neither have started a Premier League fixture this season and Minamino is interesting both Leeds and Monaco, with Liverpool valuing the forward at £20m.

The 27-year-old has failed to live up to expectations since his arrival from Red Bull Salzburg and spent the second half of last season on loan at Southampton.

Origi is out of contract this summer but will trigger an additional year should he feature in a certain number of games this season.

The Belgium international has scored five goals in just four starts in all competitions this season and is a rumoured target for Newcastle and Atalanta.

Newcastle are also interested in signing Nat Phillips, but have seen a loan offer rejected. Liverpool have also turned down an approach from Watford for the centre-back with the Hornets £7m bid falling significantly short of the Reds’ £15m valuation.

Phillips impressed after being thrust into the side last season during Liverpool’s injury crisis at centre-back, but the 24-year-old has made just one start this season following the return of the club’s first-choice options and summer arrival of Ibrahima Konate.