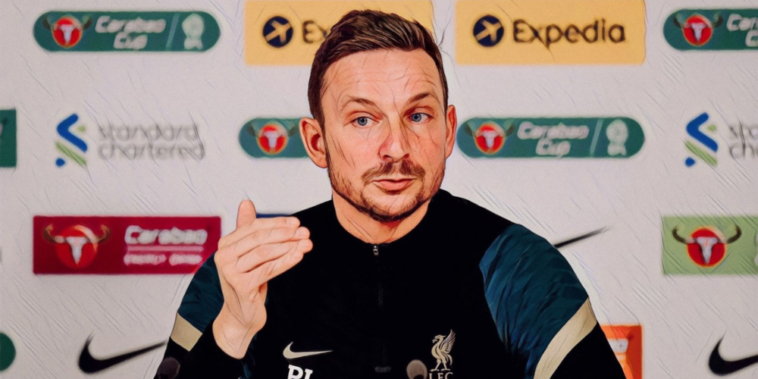 Liverpool travel to face Pep Guardiola’s side in the Carabao Cup’s fourth round tomorrow evening, in the Reds’ first fixture back since the World Cup break.

Both sides will be short of a full compliment given the World Cup commitments of both squads, but Lijnders is anticipating another great game against a team that the Merseysiders have regularly competed with in recent seasons.

Speaking at a pre-match press conference, the Liverpool assistant hinted that the fixture could be an ideal chance to test the Reds’ best prospects against top-level opposition.

“If there’s one thing this World Cup proves that you need your whole squad. The teams that because successful needed their whole squad,” Lijnders said.

“When we play League Cup it’s always in a busy schedule and we know we have to be top to win these games. We cannot rest players. The boys have to be on the top in games and its perfect time to use the squad.

“Age is just a number, we still believe we need to give our talents chances, not just younger players against lower league oppositions but Premier League too. We want them to have challenges and make them struggle because that’s how they improve. It’s my job and Klopp’s job to improve our players and to improve the team and that’s what we try to do.

“It’s never a boring game against them. Both teams will put on a top show. We know against them we have to be difficult to play against and good and efficient when we have the ball. We will try and they will try. It’s a strange situation coming back from the World Cup. The team have already proved it in the past that they will make it a top show.”