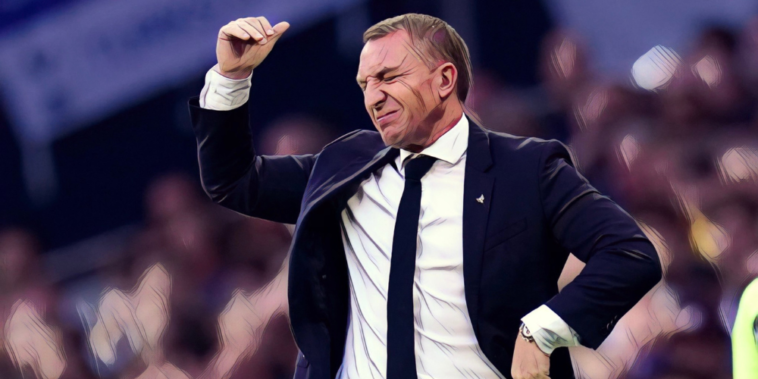 One of the most surprising stories of the Premier League season so far has been the downturn in fortunes of Leicester City. Having finished inside the top 10 in each of the previous five seasons, few had expected Leicester to be anywhere near the survival fight come the end of May. Yet things are looking bleak for the Foxes as they sit rock bottom of the league, with only a single win on the board and seven sorry losses to their name from ten games to date. Such has been the heat on Brendan Rodgers, that he is now the favourite to be the next Premier League manager to get the sack.

Sixteen months on from the club’s famous day at Wembley and it seems the fairytale story has all but ended with a stark reality arriving in its place. On the pitch the team is devoid of confidence, with a defence that has conceded 24 goals already, the worst record in the league. Their drop in form is largely the result of some underwhelming transfer windows which in itself is the consequence of missing out on Champions League revenue when they were in prime position to secure it on two separate occasions. The financial impact of the COVID-19 pandemic on the club has perhaps gone under the radar thanks to recent success but they are under the magnifying glass now and there’s not many places left to hide.

Leicester didn’t become one of the favourites for Premier League relegation overnight. Alarm bells started ringing at the King Power Stadium at the beginning of the summer transfer window when it became clear there was no money to spend. Seeing the writing on the wall, star defender Wesley Fofana forced a move south to Chelsea, while only one outfield player was purchased in Wout Faes, much to the dismay of Brendan Rodgers. Rodgers cut a more dissatisfied figure in the lead up to the new season due to the lack of transfer activity, and it’s been clear since the start of the term just how much his hands have been tied because of that lack of spending. A series of blunt and almost confrontational post-match interviews showed just how strenuous the relationship has become between the Northern Irishman and his board. Those looking to bet on Leicester’s next manager if Rodgers does get sacked should use these betting offers when they do.

However, he does need to shoulder some of the blame for some of the shambolic defending Leicester fans have had to endure in the opening nine games, as Danny Ward has had to pick the ball out of his net more than anyone else this season. The goalkeeper position has been a hot topic for Leicester fans ever since the long-serving former captain Kasper Schmeichel departed in the summer for Nice. His leadership and presence in the dressing room is something that is sorely lacking at the Kingpower this year as Leicester have a distinct lack of self belief and have let plenty of points slip through their grasp, most notably letting go of a two goal lead against high-flying Brighton only to end up battered 5-2.

The Rodgers regime in this moment has been embodied by low squad morale, tactical insufficiency, a poor set-piece record, defending inadequacy and a lack of realistic explanations or attempts to resolve issues with very little accountability taken. Add to this disastrous equation that a vast amount of quality, energy and confidence is missing from a clearly talented roster. Up to £200million is set to be lost if the Foxes are relegated; a frightening figure when you consider the scale of investment the ownership have made in a new stadium expansion and the potential fallout in the long term should Leicester face the drop.

For the time being, the Leicester board are giving Rodgers more time as he has a lot of credit in the bank with European ventures, league performances, and domestic cup tournaments. And, unlike most clubs who find themselves in a basement battle, scoring goals doesn’t seem to be a problem for Leicester. In fact, the Foxes have scored more goals this term than 13 other clubs who are above them in the table. Having said that, it feels like a change is on the horizon as time is running out on his tenure at the King Power if he doesn’t turn things around and there are plenty of options out there Leicester could pursue if they decide to pull the trigger.

Sean Dyche is the most likely candidate according to the bookmakers and while everyone is quick to criticise the style of football he encouraged in charge of Burnley, he kept the club in the Premier League for six consecutive years and that is the brief for Leicester this term, survival. He was never given much financial backing whilst at Turf Moor so he would inherit a situation at Leicester similar to the one he has dealt with before, an ideal starting point for the new boss.

The next option is Mauricio Pochettino. It was only a few years ago that the former Tottenham man was regarded as one of the best coaches in the world, having guided Spurs to the 2019 Champions League final. But after a turbulent year in charge of a Paris Saint-Germain side filled with superstars, his stock isn’t what it once was. Despite winning the Ligue 1 and French Cup titles, the Argentine was criticised for not getting the performances out of Kylian Mbappe, Lionel Messi and Neymar that were expected on paper. He could seek a challenge at the King Power Stadium to help rebuild his reputation and has plenty of Premier League experience to draw on.

The position of manager Brendan Rodgers is under increasing threat as Leicester find themselves rock bottom of the table, with defensive performances worsening week after week. While the financial restraints on the club have prevented him from strengthening his side, he has at his disposal a group of players that won the FA Cup just over a year ago and almost qualified for the Champions League. The board might look back on their decisions in the summer transfer window and decide to go big in January to keep the dreaded drop at bay. But for now the warning signs are there under Rodgers and the Chairman will have a tough decision on his hands should things get any worse.