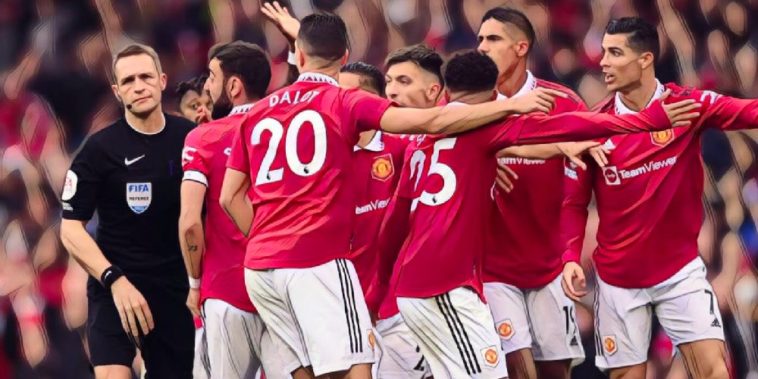 Erik ten Hag has described Antonio Conte as a ‘fabulous manager’ ahead of the visit of Spurs, as well as responded to Manchester United being charged with failing to control their players.

United host Tottenham on Wednesday evening in a game between two of the contenders for the top four, Spurs currently sitting in third and the Red Devils in fifth.

While Erik ten Hag is trying to instil a proactive, pressing style of play at Old Trafford, Conte has developed a reputation for playing a more pragmatic yet effective brand of football.

Despite the differences in style, Ten Hag was full of praise for his opposite number ahead of what will be their first meeting as managers.

“He’s a fabulous manager,” the Dutchman said at his pre-match press conference. “Winning titles, trophies in the Premier League [and] Italy, and you can really see his signature in the match from his team. That’s a big compliment I think.”

Last time out, United were held to a 0-0 draw against Newcastle, though the club have since been slapped with a charge of failing to control their players after they surrounded the referee en masse following a disallowed Cristiano Ronaldo goal.

🗣️ “I think no player is happy when they get off and especially not [Cristiano] Ronaldo. As long as it is in quite a normal way no problem with that.”

The Portuguese took the ball off the toe of Nick Pope at a free-kick and rolled it into an empty net, the veteran forward having spotted a previous touch from Fabian Schar, with United players protesting to the officials that the ball was in play.

Questioned about the behaviour of his players, Ten Hag said he and his players will “always accept the referees’ decision”, but said they were simply trying to get their point across,

“I don’t think it was too strong but I don’t know what’s happening exactly on the pitch as it’s too far away for me on the pitch. I’ve seen the video, there was a touch from the player from Newcastle that’s quite clear and they wanted to point that to the referee.

“First of all, I want to express we always accept the referees’ decision but it’s also quite normal to ask why in the moment, it was a curious incident, you ask as a team why. But finally and quite clear you have to accept it. Then you have to move on.

“You are right we are example for amateurs and youth, quite clear. We have to know our role but it’s also about professional football so when it’s a decision like this, and it was quite obvious a player touched the ball from Newcastle, our players took advantage of it to ask why.