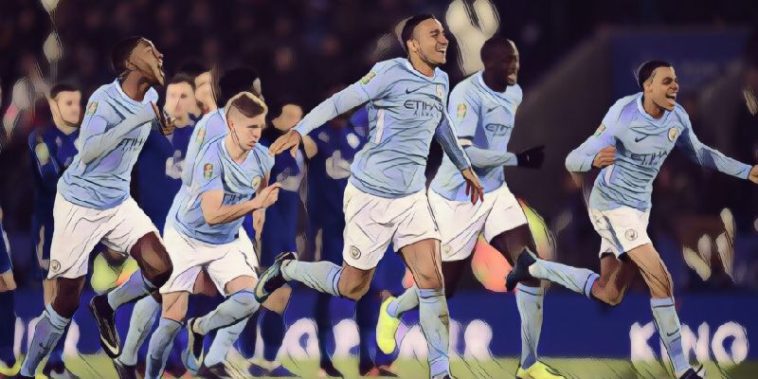 Manchester City edged past Leicester City at the King Power Stadium on penalties after a Bernardo Silva equaliser was cancelled out by a controversial late Jamie Vardy spot-kick. Here’s what we learned from the Carabao Cup quarter-final…

Alex Zinchenko is not a left-back. He’s certainly not a natural defender and, in all honesty, he’s not exactly a left-sided player at all. And yet, shoe horned into the position by Guardiola, the young Ukranian was superb. He won more tackles than anyone else on the field and never looked afraid of the ball.

However, Zinchenko’s highlight of the game was certainly a very clever goal-line clearance in the second half that rescued his side from conceding an equaliser. For a youngster playing well out of position, I felt he was excellent and has certainly proved a capable back-up to his fellow makeshift fullback Fabian Delph.

Speaking as someone who hates talking about player prices, I have to concede that City’s starting XI today cost a sum total of well over £150m. Nonetheless, it was undeniably a second-string side, and one that hasn’t seen all too many minutes this season. Many thought this City side would struggle to get over the line tonight, and they did, but a win is a win and the unfamiliar team handled the occasion with a surprising maturity.

Ilkay Gundogan and Bernardo Silva were particular highlights, lighting up the pitch with classy play and intelligent dribbling. Meanwhile, Zinchenko and Adarabioyo didn’t look out of their depth at all. It wasn’t a vintage performance but it got the job done.

Despite the introduction of new rules by the FA that punish players for simulation with bans, diving is still a prominent feature of the game this season and it was on display here as Demarai Gray threw himself to the ground quite embarrassingly to earn the penalty from which Leicester equalised. It was a dreadful decision by Bobby Madley, who had something of a shocker, and Jamie Vardy was always favourite to score.

The problem with the new regulations, in my opinion, is that it’s often impossible to prove whether a player has in fact gone over deliberately and this will surely be the case here as there was minimal contact between Walker and Gray, but the simple fact is that the Leicester player has deceived the referee and gained an advantage from doing so. It needs looking at.

Manchester City have established themselves as spot-kick experts in recent years, scoring all of their last eleven penalties in competitive shoot-outs. This was no exception, as Ilkay Gundogan, Yaya Touré, Gabriel Jesus and young striker Lukas Nmecha all scored from the spot while Jamie Vardy missed for the home side and Riyad Mahrez saw his effort saved by Claudio Bravo. This is the second time in a row City have progressed on penalties in this competition, edging past Wolves a few months ago thanks to two Bravo saves.

Whatever happened to Kelechi Iheanacho?

There was a time, strange as it sounds, when Manchester City had a young Nigerian striker to rival, if not better, Manchester United’s Marcus Rashford. But last January’s arrival of Gabriel Jesus pushed the youngster well down the pecking order and he moved to Leicester City for a sizeable fee in search of more gametime.

Since his move, however, he’s struggled for minutes, falling behind even Leo Ulloa in the striker pool under Claude Puel. Awarded a rare start today, it was another disappointing day for Iheanacho, who barely got a sniff before being substituted for Jamie Vardy early on and gave away the ball in the build-up to City’s goal. Unless something changes rapidly he’ll surely be on the lookout for a new club sooner rather than later.