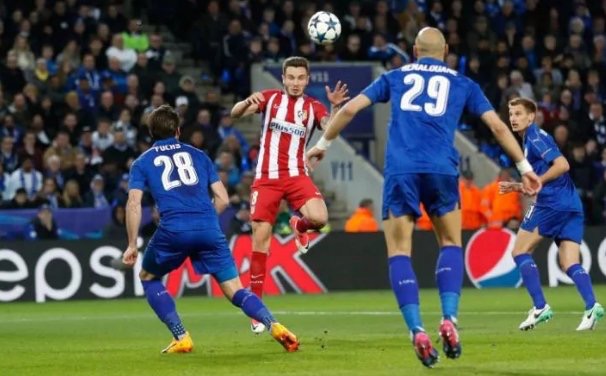 Leicester’s Champions League adventure came to a enew last night, but not before the Foxes put in a performance so reminiscent of their never say die attitude.

City’s motto is ‘Foxes Never Quit’ and despite giving themselves a huge mountain to climb after Atletico grabbed a vital away goal, a finish from Jamie Vardy on the hour gave the home side hope.

Despite laying siege on Jan Oblak’s net, the Foxes couldn’t force home the two goals they needed as Atleti advanced to their third semi final in four years.

The atmosphere at the King Power Stadium was unbelievable and the home support were full of belief that their side could continue their impossible dream.

Diego Simeone had adopted a more defensive formation with Jose Gimenez coming in for Fernando Torres whilst the Leicester team wrote itself.

The game began quite evenly with both sides sharing possession and neither testing either keeper.

And then just after the English side’s best spell of the match came the sucker punch for Leicester.

Wes Morgan, playing his first match in a month, did well to intercept a ball from Koke. However, Filipe Luis was there to put in a cross which was expertly headed across Schmeichel into the net by Saul Niguez in the 26th minute.

It was a carbon copy of the opener that Leicester had conceded in Sevilla.

The match became painful viewing for the Foxes faithful as Atletico controlled the rest of the half and it looked like men against boys.

At half time, City knew they had to score three to advance to the semi’s and Craig Shakespeare made a double change with Ben Chilwell and Leo Ulloa coming onto the field as the Foxes switched to a 3-5-2 with Riyad Mahrez occupying a more central position.

Leicester have played this formation before; it served them well as they managed the Great Escape two seasons ago. And they certainly looked more dangerous with Atletico struggling to find an outlet to relieve the pressure.

The Foxes finally found a breakthrough just after the hour mark.

Jamie Vardy continued his fine scoring run, finding the roof of the net after the away side failed to properly clear Ben Chilwell’s scuffed cross. Suddenly the stadium and Leicester City were alive.

The home side went even more and more direct and Ulloa posed all sorts of aerial problems whilst both he and Vardy had shots blocked which looked destined for the back of the net.

Atletico can always be dangerous on the counter but Antoine Griezmann was unable to fashion any chance for himself as Leicester’s dominance grew.

After around 80 minutes, the feeling was that Leicester were going to be unable to mount the ultimate comeback, as the Madrid side used very trick in the book to win cheap free-kicks from an easily convinced referee.

And so it finished 1-1 and Atletico went through 2-1 on aggregate. Simeone who didn’t shake Shakespeare’s hand after the first leg embraced the Englishman and then went out of his way to congratulate each of the City players.

Yet Leicester can have no shame as they fell agonisingly close to one of Europe’s giants.