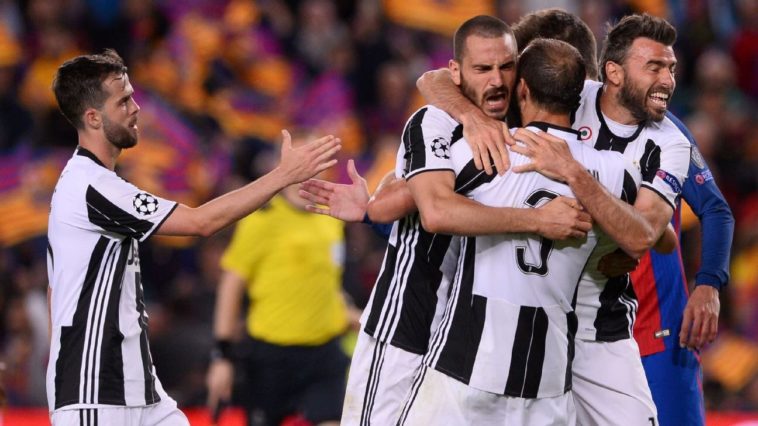 It wasn’t the most eventful game the camp nou has ever witnessed, but Juventus held Barcelona to a 0-0 draw. This meant a 3-0 aggregate score to the Italians who head through to the quarter finals.

The game started with a very offensive outlook from Barcelona who kept a lot of possession and forced the Juventus defence very deep. However this pressure didn’t lead to a breakthrough and signs of frustration for Barcelona quickly set in. More and more heavy tackles started going in from both sides and the Barcelona players in particular started calling the referee to award more bookings to the Juventus players.

Chances were few and far between in the first half with neither keeper ever seriously troubled.

Juventus came close on a couple of occasions including a speculative volley from Gonzalo Higuain and a few counter attacks from Cuadrado and Dybala.

Despite all their possession Barcelona didn’t manage many serious chances but came close through Messi on a couple of occasions. Neymar also caused problems with his quick feet and direct dribbling but was always eventually apprehended by a Juventus defender.

The score at half time was 0-0 and Juventus would definitely have been the happier of the teams as their game plan of stopping Barcelona was going very well.

The second half was a very similar pattern to the second as Juventus continued their steadfast defence and Barcelona continued to dominate the ball.

Cuadrado arguably had the chance of the game as during a quick breakaway but eventually dragged his shot wide of the target. But as Barcelona tried to continue their onslaught for a goal Juventus sat even deeper and at times struggled to get out of their own half.

Eventually with the game nearing the final whistle Barcelona threw everything forward and even had Pique operating as a striker.

Barcelona’s best chance of the game came very late on. Following a corner, Javier Mascherano found himself on the end of a cross, but his efort was straight at Gianluigi Buffon.

With only minutes left Barcelona began to tire and Juventus finally began to hold onto the ball for longer periods of time. This culminated in a spell of possession in which the Juventus fans began singing ‘Ole’ – something which didn’t go down well with the home support.

Overall it has to be said that Juventus defended incredibly well over the two legs as they managed to keep a clean sheet in both. They didn’t offer much of an attacking threat in the away leg, but the 3-0 lead meant they didn’t really have to.

The difference between this performance and that of PSG who had gained 4-0 first leg lead was the defensive stability of thr Italians.

If Juventus continue to defend like that in this competition it would be hard for any of the remaining teams to get past them.